EAST LANSING, Mich., Dec. 15 (UPI) — Lectures, a panel discussion and a Muslim comedian are all on tap for an “Islam and the media” conference slated for February at Michigan State University.

Rami Khouri will be the keynote speaker. He is the director of the Issam Fares Institute of Public Policy and International Affairs at the American University of Beirut and the editor-at-large of Beirut’s Daily Star newspaper.

The majority of countries and territories across the world have laws or constitutions calling for freedom of religion. But religious freedom is not the reality for the majority of the globe’s people.

Nearly 70 percent of the world’s population lives in countries with “high” or “very high” religious restriction – that’s the finding of a first-of-its-kind Pew Forum on Religion and Public Life survey. It notes that some of the strictest countries in the world are also the most populous. But no nation is fully free of religious restriction, it adds.

VATICAN: Muslim leaders that members of the Pontifical Council for Interreligious Dialogue met on their visit to Indonesia have shown a firm resolve to establish strong interreligious relations, says a member of the council.

Even so, Divine Word Father Markus Solo, an Indonesian priest working on the council’s desk for Christian-Muslim Dialogue in Asia, suggests interreligious dialogue in Indonesia must also include radical religious groups. 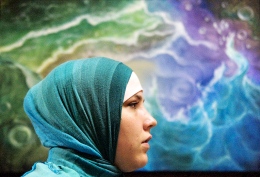 Spencer Wall, fourth-year English and sociology major, talks about her experience wearing a hijab on Wednesday night at Kerbey Lane Cafe. Wall, a Christian from West Texas, embarked on a personal experience in which she dressed as a Muslim woman for a year, starting in April.

FULL ARTICLE FROM THE DAILY TEXAN

Thanks to the media and influential individuals, the West looks on Islam with distrust and ignorance

The recent assaults by some Western thinkers, politicians and polls on Islam, coming as they did during the Haj and Eid, brought to the fore the troubled relationship between Islam and the West. For too long this relationship has been fraught with distrust, ignorance and recriminations. It has been politicised and damaged by the slander and bias of Hollywood and the mass media.

FULL ARTICLE FROM THE GULF NEWS

Manila, Philippines, Dec 3, 2009 / 01:37 pm (CNA).- A Philippines massacre which killed at least 57 people may endanger interfaith relations between Catholics and Muslims in the country. The deterioration in relations is in part due to the spread of extremist Wahhabi Islam in recent decades, a priest involved in interfaith dialogue says.

A Nov. 23 massacre in the predominantly Muslim province of Maguindanao killed at least 30 journalists and their staff and 27 other civilians, the Associated Press says. It is believed to be the deadliest single attack on the media.