Edmond, Oklahoma (CNN) — His smiling image has been cut out of a snapshot and carefully added to a photo of his father, so it looks as if he is standing beside the man. It smacks of a bad Photoshop job, but it gives the two a shared moment, even though they never met.

The boy’s sister, Fahina, is 15 and clings to scant memories and aging photographs. But Farqad, almost 10, has nothing.

She remembers sitting beside their father on amusement park rides, his words — “Look at my daughter; she’s so brave” — soothing her nerves; she still thinks of him whenever she’s on a rollercoaster. She leaned on his legs when he watched basketball on TV and imagined him cheering her on when she played the sport after he was gone. She recalls being driven to see Harvard University, before she even started elementary school, and dreams of attending an Ivy League school to make him proud.

On the morning of September 11, 2001, she woke up extra early on her own. After her father and mother finished saying morning prayers, the young girl took his face in her small hands and enlisted the promise of a Chuck E. Cheese visit. Father and daughter then kissed and said goodbye.

Farqad was born two days later, after terrorists hijacked planes and killed nearly 3,000 — including 38-year-old Mohammad Salahuddin Chowdhury, who worked atop the North Tower of the World Trade Center. 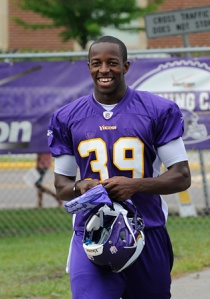 Eden Prairie, Minnesota (CNN) – Watching Minnesota Vikings starting safety Husain Abdullah on the sun-drenched field during practice on a recent afternoon, you’d never guess he hasn’t had any food or drink since sunrise.

Abdullah is an observant Muslim, which during Ramadan – the Islamic holy month that ends Monday night – means no eating or drinking from sunup to sundown, not even water.

“My religion is very important to me,” Abdullah said after practice. “I mean, it’s the basis of my life.”

He credits his parents with instilling the Muslim values he holds dear today.

“The month of Ramadan is something that we wait for every year,” Abdullah said. “When it comes, we actually celebrate it.

“People think because we’re fasting that we should dread it, but we actually celebrate the month because it’s the month in which the Quran was revealed,” he said. “Everybody gets excited.”

Prime Minister Recep Tayyip Erdogan made the announcement on Sunday to representatives of more than 150 Christian and Jewish trusts gathered at a dinner he hosted in Istanbul to break the day’s Ramadan fast. The government decree to return the properties, bypassing nationalist opposition in Parliament, was issued late Saturday.

The European Union, which Turkey has applied to join, has pressed the country to ease or eliminate laws and policies that discriminate against non-Muslim religious groups, including restrictions on land ownership. Many of the properties, including schools, hospitals, orphanages and cemeteries, were seized after 1936 when trusts were called to list their assets, and in 1974 a separate ruling banned the groups from purchasing any new real estate.

At an Iftar dinner celebrating the Muslim holy month of Ramadan tonight, President Obama honored the Muslim Americans lost on 9/11 and spoke about the upcoming 10-year anniversary of the attacks, saying, “We must be the America that goes forward as one family.”

“This year and every year, we must ask ourselves:  How do we honor these patriots — those who died and those who served?” Obama said.

“Put simply,” he added, “we must be the America that goes forward as one family, like generations before us, pulling together in times of trial, staying true to our core values and emerging even stronger.  This is who we are and this is who we must always be.” 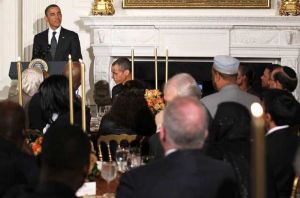 THE PRESIDENT: Thank you. Thank you so much. (Applause.)  Everyone, please have a seat, have a seat.

Good evening, everyone, and welcome to the White House. Tonight is part of a rich tradition here at the White House of celebrating the holy days of many faiths and the diversity that define us as a nation. So these are quintessentially American celebrations — people of different faiths coming together, with humility before our maker, to reaffirm our obligations to one another, because no matter who we are, or how we pray, we’re all children of a loving God.

Now, this year, Ramadan is entirely in August. That means the days are long, the weather is hot, and you are hungry. (Laughter.) So I will be brief.

To the millions of Muslim Americans across the United States and more — the more than….one billion Muslims around the world, Ramadan is a time of reflection and a time of devotion.  It’s an occasion to join with family and friends in celebration of a faith known for its diversity and a commitment to justice and the dignity of all human beings. So to you and your families, Ramadan Kareem.

BRANDYWINE HUNDRED, Del. — Not many Muslims get invited to be fill-in preachers at Christian congregations, but that’s what happened to Semab Chaudhry at Silverside Church.

Last month the pharmaceutical audit manager stepped into the pulpit for a Sunday talk explaining the reverence that Islam gives to figures such as Mary, Jesus, Abraham and Moses.

“It’s remarkable how much commonality there is among our faiths,” says June Eisley, a member of the Brandywine Hundred congregation. “I wish all Christians could learn this.”

As Chaudhry, his wife, Rabia, and their three children begin their observance of Ramadan they are full of hope for renewal and drawing closer to God, as this is the holiest time on their religious calendar.

FULL ARTICLE FROM THE REPUBLIC 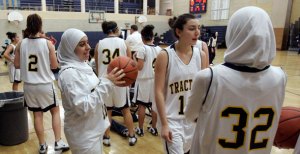 If you have colleagues and friends who are Muslim American, these findings from a newGallup poll are probably not surprising. But if you know Muslim Americans only through the skewed lens of the media, you might be shocked. That’s because there is a huge gap between the way Muslim Americans—and their religion, Islam—are seen in the media and who they really are.

In the media—and in resulting public perceptions—Muslims tend to be default, all-purpose villains. They are innately suspect, hostile to democracy, and the likely perpetrators of terrorist attacks anywhere in the world. From the Oklahoma City bombing in 1995 to the Norway bombing this July, many pundits and reporters were quick to say that Muslims did it, even before the facts were in.

Six months after a coalition of activist groups in Egypt toppled Hosni Mubarak from power, many in the West are once again raising alarms that the so-called Arab Spring is merely the harbinger of an Islamist takeover of the Middle East.

The latest salvo comes in response to a rally held in Tahrir Square last Friday that was dominated by Islamist and Salafist (ultra-conservative Muslim) groups, many of them associated with the Muslim Brotherhood. The sheer size and strength of the demonstration was, for many, a sign that the dream of democracy in Egypt may be giving way to the reality of theocracy. The Washington Post wrote that the Islamists’ presence at the rally “was a stunning show of force that left the liberal pioneers of Egypt’s revolution reeling.”

It is true that Islamists comprised the largest and most vocal of the more than 25 different Egyptian organizations, most of them labor and youth groups, who organized last week’s mass show of unity against the country’s military rulers. But that is a reflection of their superior organizational skills and their ability to mobilize their members, and not of their political clout or their national support.