After the deadliest anti-Semitic attack in American history, interfaith ties, initiative and compassion led to organization and solidarity others can model.

In Pittsburgh, they don’t call the blood-soaked anti-Semitic rampage that began at 9:50 A.M. on a rainy Saturday one year ago, when a white supremacist gunned down 11 Jewish worshippers “the Pittsburgh synagogue shooting” – although that’s how it is commonly referred to elsewhere. Rather, it is referred to in the city by the date no local resident will ever forget: 10.27.

Pittsburgh, people there will tell you, is a thriving and close-knit city that they love and identify with deeply, whose residents have come together across all walks of life – despite differences in religion, race and politics – to repudiate the deadliest attack on Jews in American history. Pittsburgh is “Stronger than hate” as the ubiquitous signs created in response to the attack continue to remind passersby from front yards and shop windows.

“Yes, this is a horrible incident in our history we should never forget,” says Jeff Finkelstein, CEO of the Jewish Federation of Greater Pittsburgh, “but it’s the response to that the moment that is the only thing that should define us.”

That comprehensive response was closely coordinated, with Jewish communal agencies taking the lead and dividing up responsibilities of security and mental health care in the immediate aftermath of the attack and beyond. Those efforts were buoyed by long-standing ties with local churches and mosques, by strong support from the mayor and municipal officials, and by the city’s bedrock of foundations, nonprofit agencies and academic institutions.

As an American Muslim, I felt the tension experienced by all Americans after the 9/11 terrorist attacks, yet all Muslims were and still are suspects. The media put Muslims on the defense, and we are still trying to prove our innocence. Explaining Islam became an urgent necessity especially in view of the hatred preached by Islamophobia.

During that infamous morning, my wife was in our house in Fairfax, VA, with my two boys who were attending George Mason University. I was in Saudi Arabia doing a project for a Saudi prince. My wife suddenly called and asked if I was watching TV. I said, “No, I’m busy working on a business plan for a client.” But with a horrified voice she said, “Oh my God, a plane hit the World Trade tower and another plane is going to hit the second tower!” She sounded horrified, and she asked again, “Are you watching?!” Moved by the urgency of her voice, I turned to CNN to see the most horrifying event I witnessed ever. A plane hit the second tower as I watched the screen. Suddenly it dawned on me this is not an accident, but a disaster of colossal dimension was taking place in front of my eyes. Additional disastrous events took place that day to make it one of the darkest days ever for the U.S. and for American Muslims.

My wife and I spoke several times that day. We were confused, angry, and scared. That evening my wife called to tell me that she was afraid and worried about the boys’ safety. A friend suggested that she join other friends for a prayer meeting and to bring the boys with her. This was a first for my wife, but she and my boys were welcomed and felt among friends. The group started praying for the President and other government officials, and then my wife was in for the surprise of her life when the group started praying for Osama bin Laden’s forgiveness.

This was the first time this Muslim woman was exposed to the concept of loving your enemies. I remember the long conversation I had with my wife about that concept and about Jesus. Jesus was well known to us through the Qur’an, where his miracles are stated in details. Culture teaches us to hate our enemies while, Jesus teaches us to love them. Talking about Jesus and his teachings seemed to take our minds away from the tragedy that surrounded us to another dimension of love. While 9/11 was a disaster for many, it was my first exposure to love, Jesus-style. I was challenged to start reading the Qur’an with fresh eyes looking for the concept of loving your enemy. It says, “Good and evil are never equal. Repel evil with good, until your enemy becomes like an intimate friend” (41: 34). Muslims often read this verse, but the principle of loving one’s enemies is not a part of our consciousness and it should be.

A far-right think tank pushed model bills on sharia law and terrorism in dozens of states. Civil rights groups say the goal was to stoke fear.

In Florida, a legislator proposes striking at the foundations of terrorism with a bill bolstering victims’ ability to sue its supporters.

But both get their ideas, and the actual text of their bills, from the same representative of the same right-wing think tank.

And when they introduce the bills, the same activist group dispatches supporters to press for passage.

Eric Redman of Idaho and Mike Hill of Florida are among dozens of legislators who have sponsored copycat bills written and pushed by a network of far-right think tanks and activists.

The legislation was developed by the Center for Security Policy, which was founded by Frank Gaffney, a Reagan-era acting Assistant Secretary of Defense, who pushes conspiracy theories alleging radical Muslims have infiltrated the government. Once the copycat bills are introduced, local chapters of the Washington, D.C.-based ACT for America, which describes itself as the “NRA of national security,” encourage their supporters to show up at legislative hearings and flood lawmakers’ inboxes and phone lines in support of the bills. ACT’s founder, Brigitte Gabriel, has claimed that up to a quarter of all Muslims support the destruction of Western civilization.

ACT and the Center for Security Policy are at the center of a broader network that over a decade has waged a successful campaign that has reached every statehouse and led to the bills they’ve written and supported being introduced more than 70 times. Six states – Arkansas, Florida, Kansas, Louisiana, North Carolina and Tennessee – have passed both the anti-Islamic-law and anti-terrorism measures.
FULL ARTICLE FROM USA TODAY

These political debates – which cite terrorism and political violence in the Middle East to argue that Islam is incompatible with modern society – reinforce stereotypes that the Muslim world is uncivilized.

They also reflect ignorance of Sharia, which is not a strict legal code. Sharia means “path” or “way”: It is a broad set of values and ethical principles drawn from the Quran – Islam’s holy book – and the life of the Prophet Muhammad. As such, different people and governments may interpret Sharia differently.

Still, this is not the first time that the world has tried to figure out where Sharia fits into the global order.

In the 1950s and 1960s, when Great Britain, France and other European powers relinquished their colonies in the Middle East, Africa and Asia, leaders of newly sovereign Muslim-majority countries faced a decision of enormous consequence: Should they build their governments on Islamic religious values or embrace the European laws inherited from colonial rule?

Nearly 300 people have now been confirmed killed in the Easter attacks in Sri Lanka. And several sources are now suggesting a domestic Muslim Islamist group may have been linked to the atrocity – although no group has yet claimed responsibility.

Sri Lanka’s Muslim community is spread across the country, but they make up 9.7% of the island’s population. Even though most Sri Lankan Muslims are Sunni, it is a diverse community, with some following the mystical form of Islam, Sufism. Linguistically, most have Tamil as their mother tongue, often leading them to be categorised as part of the island’s Tamil minority, alongside Hindus and Christians. There are, however, Muslims who speak the majority Sinhala language.

The origins of Sri Lanka’s Muslim community can be traced back to the historic trading routes between South and Southeast Asia and the Middle East. Traders from the Middle East (Arabs and Persians) developed commercial interests in southern India in the seventh century, which also spread to Sri Lanka. These Middle Eastern merchants married Tamil and Sinhalese women and settled in the east of the island around Batticaloa and Ampara.

The Portuguese, who started to control Sri Lanka in the 16th century, used the term “Moor” to describe the island’s Muslims (as they did other Muslim communities they encountered throughout the world). As a consequence, a local “Moorish” identity was established. In the early 20th century, some Muslims promoted this as a unique “Ceylon Moor” racial identity (the island was called Ceylon during the colonial period). They presumed an Arab heritage, which distinguished them from the local Tamil community, which has its origins in southern India and northern Sri Lanka.

FULL ARTICLE FROM THE CONVERSATION (UK)

Jews in Pittsburgh and Muslim worshipers in Christchurch, New Zealand, have forged a grim bond that transcends oceans and faiths: Mass killers have targeted their houses of prayer.

The Jewish community in Pittsburgh was roiled when 11 people were killed at the Tree of Life synagogue in October. People of all religions rallied around them for support.

Now, members of Tree of Life have raised thousands of dollars for a Muslim community that lost 50 people, killed by a gunman Friday at Al Noor and Linwood mosques in Christchurch. Dozens more were injured.

“We feel compelled to come to the aid of those communities, just as our Jewish community was so compassionately supported only a few short months ago by people around the world of many faiths,” says a GoFundMe page set up by the congregation. “We recall with love the immediate, overwhelming support Tree of Life received from our Muslim brothers and sisters in Pittsburgh.”

Donors provided thousands of dollars a day after the page was launched Sunday.

The effort mirrors an outpouring of support from the Muslim community in Pittsburgh after the massacre there. Nearly a quarter-million dollars was raised by Muslim groups to help injured worshipers and grieving families.

“To the families going through the most difficult moments in your lives: the Jewish community of Pittsburgh is with you,” the Tree of Life funding page says. “Our hearts are with you. We hold you in our prayers.”

“Tree of Life members, and our friends who continue to comfort and bolster us as we recover, must now come together to support the Muslims of Christchurch,” the page says.

There have been other similar efforts launched in Pittsburgh. The Jewish Federation set up a relief fund within days of the attack in New Zealand, the Pittsburgh Post-Gazette reported.

(CNN)Churches are opening their doors after mosques were told to close for security issues in the wake of the Christchurch, New Zealand, terrorist attacks. Mosques are receiving messages of solidarity and flowers. A fundraiser for the victims is nearing $400,000. And a UK-based national forum for Christian-Muslim engagement is calling on Christians to go along to Friday prayers at their local mosques — a call the archbishop of Canterbury endorsed. 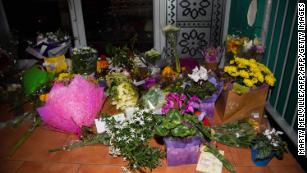 Here’s how you can help the victims of the New Zealand terror attacks
These are only a few examples of how people and institutions are showing solidarity and offering help to Muslim communities all over the world after Friday’s shooting attacks on two Christchurch mosques that killed at least 49 people and seriously injured 20 others.
Here’s how you can help the New Zealand victims
In some of the worst terror attacks and mass shootings of recent years, Muslim communities have stepped up to help in different ways. In the aftermath of October’s Tree of Life Synagogue shooting in Pittsburgh, for example, the Muslim-American nonprofit groups CelebrateMercy and MPower Change launched a crowdfunding appeal that raised thousands for the victims.
FULL ARTICLE FROM CNN