NEW YORK – Fifteen renovated galleries offer fresh perspective on the Metropolitan Museum of Art’s collection of more than 12,000 Islamic works of art spanning 13 centuries and an area ranging from Spain to India.

About 1,200 pieces of art will be on view at any one time with displays of textiles and works on paper changing frequently due to the sensitivity of these materials to light.

A re-thinking of the Islamic art collection, developed alongside the museum’s years-long renovation project, led to the new galleries being named to reflect the range of nations and empires that produced the art.

While the collection was once succinctly termed Islamic Art, the museum now describes the works inhabiting the galleries as “Art of the Arab Lands, Turkey, Iran, Central Asia, and Later South Asia.”

The new emphasis on geography grew out of the view that while religion unifies the collection, region diversifies it.

FULL ARTICLE FROM THE MONTREAL GAZETTE

EGYPT, the largest and most important country to overthrow its government during the Arab Spring, is careening toward a disastrous parliamentary election that begins on Nov. 28 and could bring the country to the brink of civil war.

As protesters fill Tahrir Square once again and violence spreads throughout Cairo, the military government’s legitimacy is becoming even more tenuous. The announcement Tuesday of a “National Salvation Government” may stem the violence for now, but the coming vote will not lead to a stable democracy.

The election is likely to fail, not because of vote-stealing or violence, but because the rules cobbled together by Egypt’s military leaders virtually guarantee that the Parliament elected will not reflect the votes of the Egyptian people.

By Idris Tawfiq – The Egyptian Gazette

Being allied too closely to the former regime lost Al-Azhar credibility in the eyes of Muslims both here and throughout the world. In the absence of an authoritative voice to speak in the name of Islam, other voices rose up to speak on behalf of Muslims and these have left the world with a legacy of fanaticism and extremism that will take many years to overcome.

These voices, ignorant of Islam, have imagined a mood of hostility between Muslims and others that has never been a part of Islam’s message.

We are now living with the results of this. In recent months, the Christian Churches have been meeting to evaluate the situation they find themselves in. There is no doubt that as a result of many of the changes sweeping across the Arab world, many Christians have become fearful for their future, imagining that an upsurge in Islam will mean a rise in extremism and a threat to their safety. It is a sad fact that in recent months many thousands of them have packed their bags and left the Middle East altogether.

And yet, it is impossible to imagine a Middle East without a Christian presence. Who could imagine an Egypt without Christian and Muslim families living together, side by side, as they have done for centuries? Twenty years ago, no child going to school asked his classmate what religion he belonged to. Voices from outside, though, have managed to fuel mistrust and misunderstanding to such a level that sectarianism has indeed become a problem, both in Egypt and throughout the Middle East.

FULL ARTICLE FROM THE EGYPTIAN GAZETTE

Have you ever wondered exactly what it is to be an American Muslim? Are they human? How exactly to do they plan on killing us all and turning the United States into a Muslim nation ruled by a galactic caliphate? And how have they learned to pretend to enjoy living here in the United States even though we all know they consider this country to be the great Satan?

Hello. My name is Jeremy Greenberg, and I am here to help you better understand the truth about American Muslims. Although my opening questions are clearly sarcastic, I, like many Americans was largely ignorant about what it’s like to be Muslim in America. That is, until last March when this Jew walked into a mosque in Louisville, Kentucky, a city in which I was performing for the week, and converted to Islam. I am now alternatively known as Assad Ibrahim, or “Lion of Abraham.”

Why did I convert? Simple. I wanted to better understand the life of Muslims in America, and what their growing presence means for the rest of us. I didn’t trust how politicians and the media were playing the issue, and I didn’t want any second-hand information. The only way I truly felt I could know American Muslims was to become one.

NEW YORK – Anti-Muslim hate crimes rose by 50 per cent last year, skyrocketing over 2009 levels in a year marked by some vicious rhetoric of Islam-bashing politicians and activists, especially over the plan to build a mosque near the site of 9/11 attacks in New York, according to FBI statistics.

Although the national statistics compiled by the FBI each year are known to dramatically understate the real level of reported and unreported hate crimes, they do offer telling indications of some trends.
The latest statistics, showing a jump from 107 anti-Muslim hate crimes in 2009 to 160 in 2010, seem to reflect a clear rise in anti-Muslim rhetoric from groups like Stop Islamisation of America. Much of that rhetoric was aimed at stopping the mosque in lower Manhattan.
At the same time, the new FBI statistics showed a rise of almost 11 per cent in hate crimes against immigrants from Latin America. The increase may be related to anti-immigrant rhetoric deployed as Arizona passed a harsh law targeting immigrants in 2010. Since then, even more anti-immigrant rhetoric has been heard around the country, suggesting that when the FBI’s 2011 statistics come out, they will show a further rise in anti-Latino hate crime.
FULL ARTICLE FROM THE NATION 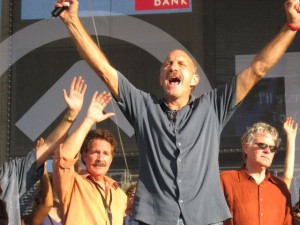 DETROIT — A group that counts Islam among the ills facing the nation began a 24-hour prayer rally Friday evening in an area with one of the largest Muslim communities in the United States.

The gathering at Ford Field, the stadium where the Detroit Lions play, is designed to tackle issues such as the economy, racial strife, same-sex relationships and abortion. But the decade-old organization known as TheCall has said Detroit is a “microcosm of our national crisis” in all areas, including “the rising tide of the Islamic movement.”5

Leaders of TheCall believe a satanic spirit is shaping all parts of U.S. society, and it must be challenged through intensive Christian prayer and fasting. Such a demonic spirit has taken hold of specific areas, Detroit among them, organizers say. In the months ahead of their rallies, teams of local organizers often travel their communities performing a ritual called “divorcing Baal,” the name of a demon spirit, to drive out the devil from each location. 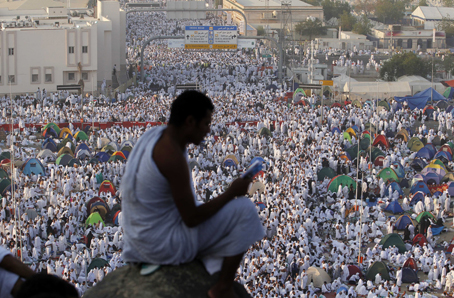 (CNN) — Each year, more than 3 million Muslims commit to Hajj, the pilgrimage to Mecca that represents the fifth and final “pillar” of Islam and the largest annual human gathering on the planet. Every Muslim who is physically and financially able to do so is expected to make this pilgrimage once in their lifetime.

As described in the Hadith of Gabriel, each pillar of Islam acts as a guide to day-to-day conduct for Muslims, outlining proper professions to God, prayer and spiritual mindfulness, not unlike the Book of Common Prayer for Catholics and Protestants or Judaism’s Siddur.

For this year’s Hajj, iReporters from around the world documented their journeys, describing their experiences as they complete this Islamic sacrament. Thanks to the power of social media and platforms like CNN’s iReport, they’ve been able to share their faith with the world, giving Muslims and non-Muslims alike a glimpse of the significance of this powerful and transformative event.

(CNN) — Millions of Muslims from around the world were in the holy city of Mecca on Saturday for the first day of Hajj, the annual pilgrimage that every able-bodied Muslim is expected to perform at least once in his or her life.

Dressed in white and following in the footsteps of the prophet Mohammed, pilgrims climbed Mount Arafat, just outside the Saudi Arabian city.

Hajj, a five-day pilgrimage, consists of a series of detailed rituals in Mina, Muzdalifa, Arafat and Mecca.

It is one of the five pillars of Islam.

Will this year’s Hajj have an ‘Arab Spring’ effect?

This year’s pilgrimage is unique as it is the first to happen since the Arab Spring began last year.

Some experts are watching for potential flare-ups in Saudi Arabia, a country governed by an unelected royal family and where freedoms are limited.

Hundreds of protesters were prevented from returning to a symbolic square in Bahrain’s capital, Manama, on Friday, following the funeral of a man the main opposition party said was beaten to death by security forces this week.

Activists said this video, posted on YouTube on Friday, showed members of the country’s national guard deploying in armored vehicles to prevent mourners from marching to an area of the capital formerly known as Pearl Square.

The square, also known as the Lulu Roundabout, was a center of the country’s protest movement in February before it was cleared by force and the monument at its center razed to the ground by the authorities.