Religious violence is undergoing a revival. The past decade has witnessed a sharp increase in violent sectarian or religious tensions. These range from Islamic extremists waging global jihad and power struggles between Sunni and Shia Muslims in the Middle East to the persecution of Rohingya in Myanmar and outbreaks of violence between Christians and Muslims across Africa. According to Pew, in 2018 more than a quarter of the world’s countries experienced a high incidence of hostilities motivated by religious hatred, mob violence related to religion, terrorism, and harassment of women for violating religious codes.

The spike in religious violence is global and affects virtually every religious group. A 2018 Minority Rights Group report indicates that mass killings and other atrocities are increasing in countries both affected and not affected by war alike. While bloody encounters were recorded in over 50 countries, most reported lethal incidents involving minorities were concentrated in Syria, Iraq, Nigeria, India, Myanmar, Pakistan and Bangladesh. Hostilities against Muslims and Jews also increased across Europe, as did threats against Hindus in more than 18 countries. Making matters worse, 55 of the world’s 198 countries imposed heightened restrictions on religions, especially Egypt, Russia, India, Indonesia and Turkey.

How is it that religions – which supposedly espouse peace, love and harmony – are so commonly connected with intolerance and violent aggression? Social scientists are divided on the issue. Scholars like William Cavanaugh contend that even when extremists use theological texts to justify their actions, “religious” violence is not religious at all – but rather a perversion of core teachings. Others such as Richard Dawkins believe that because religions fuel certainties and sanctify martyrdom, they are often a root cause of conflict. Meanwhile, Timothy Sisk claims that both hierarchical religious traditions (such as Shi´ism) and non-hierarchical traditions (such as Buddhism) can both be vulnerable to interpretation of canon to justify or even provide warrants for violent action.

Ouagadougou, Burkina Faso – It happened more than 20 years ago, but Inoussa Bouda remembers it as if it happened yesterday.

Waiting at a bus station on his way to his grandparents, he saw a beautiful woman cross the road.

“I was thinking, ‘I don’t know which bus she’s taking, but even if she’s going to the other side of the country, I don’t care – I’m taking the bus with her.'”

Bouda was delighted to find out that the woman was taking the same route as him. The two started talking and the conversation sparked a relationship. Nine years after first meeting on September 29, 1998, in Burkina Faso’s capital, Ouagadougou, they got married.

“At the beginning, our families were against the marriage, but when they realised how much we loved each other they gave up,” Bouda said, smiling.

The 45-year-old entrepreneur, a Muslim, and his wife Alida, a Christian, are an interfaith couple, which according to Burkina Faso’s census, make up approximately 10.4 percent of all married couples in the country. Their three children all have a Christian and a Muslim first name and attend both mosque and church with their parents.

“I see the girls getting up on Sundays and getting ready to go to church, but our boy is still sleeping,” Alida Bouda says, sitting by her husband.

“When his father goes to the mosque he always gets ready on time. It makes me think he’s going to be a Muslim.”

Archbishop Samir Nassar, of the Maronites (Syria) speaks on the presence of the Church in war-torn Syria.

The archbishop of Damascus reiterates the important presence of the Catholic Church in a country where violence has claimed hundreds of thousands of human lives and has led to the forced migration of millions.

Syria has been at war for the past nine years. What began as protests against the regime of President Assad in 2011 degenerated into a war between the Syrian government and anti-government rebel groups.

Speaking to the Vatican Radio, Archbishop Samir Nassar, of Damascus of the Maronites in Syria, touched on pertinent issues such as justice, inter-religious dialogue between Christians and Muslims, migration, and the application of the social teachings of the Church in the context of Syria.

On November 3, 2018,  a memorial service was held in Chicago to celebrate the life and contributions of a larger-than-life figure in Christian-Muslim dialogue, the Rev. Lewis R. Scudder, Jr.  who passed away a year ago in his beloved Cyprus.

Rev. Scudder came from a long line of Reformed Church in America missionaries who served in various parts of the world  stretching back to 1819.   His own unique contribution arose out of his rootedness in the culture of the Arabian Gulf having been born and raised in Kuwait where his first schooling was in an Arabic medium school.  His mastery of the Arabic language and culture  led him in his later years to serve as a translator for the Beirut-based Middle East Council of Churches, but perhaps his greatest contribution was translating Arab culture to American Christians who knew (and continue to know) little about what is uniquely inviting and intriguing about the Arab world with its rich history and storied (and at times conflicted) cultures.

From 2004 – 2012 Lew wrote a monthly series of articles reflecting on various topics of interest arising out of current events and historical realities for Middle Eastern peoples.  He called these monthly musings “Morning Land Meditations.”

Once a week this blog will feature one of Rev. Scudder’s insightful reflections.  The full collection can be found here: 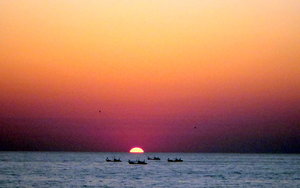 John Hubers, a good friend, has been urging me to embark on a regular series of compositions more or less on the model of Alistair Cooke’s unique weekly event on BBC radio entitled, ‘Letter From America’. (Mine, of course, will be ‘Letter from the Middle East’, and I imagine that makes at least one ocean and a whole sea of difference.) Cooke, an expatriate Englishman who adopted America, did a magnificent job during a
career spanning well over a fifty-years. There were those of us who would set aside other engagements simply to hear his dry voice wheeze out another of his droll rambles replete with pithy aphorisms, observations on history, home-grown wisdom and personal anecdotes. It was, perhaps, to be his last poetic exclamation that, within days of his swansong broadcast, he died.

He was, when all is said, a brilliant journalist. More to the point, he was a sensitive and insightful human being, and he loved his subject — America. For all the times I heartily disagreed with him, he was my image of that archaic species of individual we once knew as a ‘Christian gentleman’. America never had a more credible, eloquent, persuasive and committed ambassador, even though our government, to my knowledge,
never paid him a red cent for it. He was a bridge person in an age of barrier building and deceptions with smoke and mirrors. We shall all miss him now that he is wheezing out his good advice before the Throne of Grace.

I make no pretense of matching Cooke. But I do have a few credentials. I am, for instance, an expatriate American who has adopted the Middle East. Or perhaps it was that the Middle East adopted me. I do not know. But I do love it, and those who know me know I’ve some stories to tell.

So, with some trepidation, here goes!

With an estimated population of 1.8 billion, Muslims are the world’s second-largest religious group, after Christians. But our surveys have found that about half of Americans – as well as most Western Europeans – say they know little or nothing about Islam. Try our email course on Muslims and Islam Learn about Muslims and Islam through four short lessons delivered to your inbox every other day. Sign up now!

Pew Research Center has conducted more than a decade’s worth of global research on religion, including surveys of Muslims in 39 countries, three comprehensive surveys of Muslim Americans, several demographic studies of the world’s major religions (including population growth projections), and a series of surveys that measure how people living in the U.S. and Europe view Muslims and Islam.

We have drawn on this research to answer questions such as: How differently do Muslims around the globe practice their faith? What do they believe? How are they viewed in public opinion in various Western countries? How much discrimination do they face?

WASHINGTON: Delta Air Lines was Friday fined $50,000 by the US Department of Transportation to settle allegations it discriminated against three Muslim passengers who were ordered off their planes.

In its consent order, the department said it found Delta “engaged in discriminatory conduct” and violated anti-discrimination laws when it removed the three passengers.
In one incident on July 26, 2016, a Muslim couple were removed from Delta Flight 229 at Charles de Gaulle Airport in Paris after a passenger told a flight attendant their behavior made her “very uncomfortable and nervous.”

“Mrs X” was wearing a head scarf and the passenger said “Mr X” had inserted something into his watch.

The captain then spoke with Delta’s corporate security, who said Mr.and Mrs.X were US citizens returning home and there were “no red flags.”

However the captain refused to let them re-board the plane.

The Department of Transportation said the captain had failed to follow Delta’s security protocol and it appeared that “but for Mr.and Mrs.X’s perceived religion, Delta would not have removed or denied them reboarding” of their flight.

Several thousand Muslims across Ethiopia in recent days have protested against the burning of four mosques in the Amhara region.

The attacks last Friday in Motta town, more than 350km (217 miles) north of the capital Addis Ababa, also targeted Muslim-owned businesses. Muslims have called for the perpetrators to be brought to justice.

Prime Minister Abiy Ahmed has called the attacks “attempts by extremists to break down our rich history of religious tolerance and coexistence”. Recent ethnic-based unrest in some parts of the country has at times taken religious form.

Prominent Muslim scholar Kamil Shemsu on Tuesday told The Associated Press news agency there are “political actors who want to pit one religious group against another” and blamed the negative role of activists and videos circulated online.

Amhara regional officials said they have arrested 15 suspects in connection with the attacks. Police commander Jemal Mekonnen told state media the attacks appeared to be triggered by news of a fire that broke out in an Orthodox church a few days earlier.

Regional officials were criticised for their slow response and their inability to stop similar attacks.

Many communities across Ethiopia, including Addis Ababa, have seen demonstrations.