Pope Francis extended his warm greetings to the people of the UAE in a video message released by the Vatican on Thursday, ahead of his visit to Abu Dhabi next week.

He began the video, posted in Italian, with the Islamic greeting “salam alaikum” (peace be upon you all) before saying he was pleased to be visiting the UAE, a “country which strives to be a model for co-existence and human fraternity and a meeting point of different civilisations and cultures”.

He also thanked Sheikh Mohamed bin Zayed, Crown Prince of Abu Dhabi and Deputy Supreme Commander of the Armed Forces, for inviting him to “take part in a dialogue of religions”.

On Thursday, Sheikh Mohamed responded by welcoming the Pope to the country, saying that he is looking forward to the “historic” interfaith meeting.

“We are hopeful that generations to come will prosper in peace and security,” Sheikh Mohamed said on Twitter.

We warmly welcome you Holy Father, Pope Francis and look forward to the historic Human Fraternity Meeting between you and His Eminence Dr Ahmad Al Tayyeb, Grand Imam of Al Azhar Al Sharif, in Abu Dhabi. We are hopeful that generations to come will prosper in peace and security.

249 people are talking about this

Sheikh Nahyan bin Mubarak, Minister of Tolerance, said it would be “an honour to welcome the Pope to the UAE” and that he would be visiting a country that had learned the value of tolerance.

He said the Vatican and the UAE each “embrace diversity and recognize the special talents of various population elements of the global society.”

FULL ARTICLE FROM THE NATIONAL 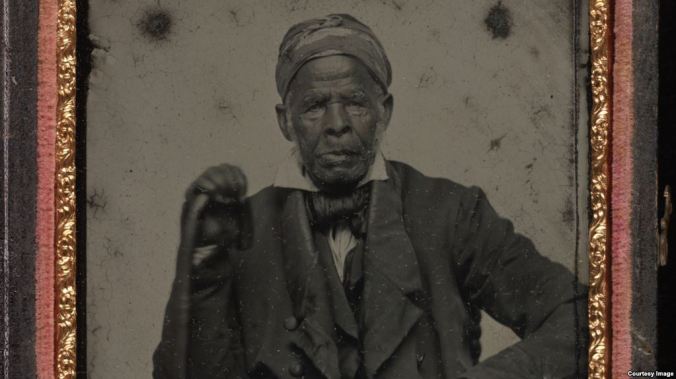 In the year 1807, a wealthy scholar was captured in West Africa, brought to the United States and sold into slavery. His name was Omar Ibn Said. He was 37 years old at the time, and he spent the rest of his life enslaved.

Said was one of many enslaved Muslims in early U.S. history. Up to 40 percent of Africans captured and brought to the U.S. were from mostly Muslim countries in West Africa.

Said’s story might have been forgotten, but he wrote about it in a book called The Life of Omar Ibn Said. The U.S. Library of Congress recently received the book, which was written in Arabic.

The book is one of only a few personal stories written by a slave in America. It is also one of the first intimate reports of the early history of Muslims in the United States.

The book challenges the idea that the U.S. is a Christian nation, says Zaheer Ali. He is a historian at the Brooklyn Historical Society in New York. Ali adds: the book “opens us up to the understanding” that people who were not Christian helped build the United States.

What records did enslaved Muslims leave?

Most enslaved African Muslims did not leave written records. But we can learn about their lives from public evidence and the memories of their families.

How long Muslim slaves practiced their faith is unknown. Some became Christians. Others acted as if they did to better deal with their captors.

But there is evidence that some remained Muslim.

The still-unidentified citizen from Maryland was handcuffed and detained for hours, but the humiliation didn’t end there. Then-White House Press Secretary Sean Spicer attempted to defend the indefensible by erroneously labeling him a potential “security threat.”

I was about the Maryland boy’s age when I came to the United States from Lebanon. Like many of those impacted by the executive order, my family had traded the uncertainty of war for the safer uncertainty of a new home in what my parents called, in their native Arabic, “Amreeka.”

More: Marine’s mom: My son is a U.S. citizen, why was he detained by ICE?

In the days after the Muslim ban was instituted, I watched images of Muslim immigrants speaking to reporters after hours of detention and questioning.Again and again, reporters asked the travelers variations of the same question: “What do you say to America?”

“I love the American people,” they responded in a diversity of languages and dialects representing the gradations of a Muslim community globally impacted by the newly-inaugurated American president’s first Muslim ban. That order, subsequently struck down by the courts, suspended resettlement of refugees and barred the entry of nationals from seven Muslim-majority countries.

Mohammad Al-Issa is secretary-general of the Muslim World League and president of the International Organization of Muslim Scholars, based in Mecca, Saudi Arabia.

Seventy-four years ago, the gates of the Auschwitz death camp were torn down, and the Nazis could no longer hide their heinous crimes. For decades, however, some have chosen not to see what really happened wherever the Nazis and their henchmen wielded power. Instead, they deny the horrors of a diabolical plan to implement a hateful idea of racial purity that ultimately led to the murder of millions of innocent men, women and children — including six million Jews.

But denying this history has only helped those who continue to perpetrate hateful ideas of racial, ethnic or religious purity, such as the genocidal killers of the Rohingya people in Myanmar, which is also known as Burma. The lessons of Holocaust are universal and Muslims around the world have a responsibility to learn them, heed the warnings and join the international commitment to ensure “never again.”

One year ago, as International Holocaust Remembrance Day approached, I wrote a letter to Sara Bloomfield, director of the U.S. Holocaust Memorial Museum, on behalf of the Muslim World League, an organization that represents more than 1 billion Muslims from the four corners of the world. In that letter, I expressed “our great sympathy with the victims of the Holocaust, an incident that shook humanity to the core, and created an event whose horrors could not be denied or underrated by any fair-minded or peace-loving person.”
FULL ARTICLE FROM THE WASHINGTON POST

With a Muslim community of 300,000 people, the former British colony has the amenities for Muslim travellers in place, writes Hanna Hussein

KNOWN as one of the world’s most densely populated city, Hong Kong is a melting pot of culture even though 93 per cent of its 7.4 million population are ethnic Chinese.

Little did I know that there’s a strong Mus-lim community of 300,000 people. And one third of them are locals.

There are more than five mosques in Hong Kong and a huge number of halal restaurants, which undoubtedly make Hong Kong a Muslim-friendly destination.

Islam was introduced in Hong Kong during the British colony in the early 19th century. The earliest Muslim settlers were soldiers from India brought in by the British.

Later after Hong Kong developed into an important harbour, more and more Muslim immigrants came in. The British government respected the rights of Muslim communities and allocated land for mosques.

This was when the autonomous territory got its first mosque —­ Jamia Mosque in 1849. The small mosque, built at the Mid-Level of the famous Shelley Street in Central Hong Kong, also known as the ladder street where you can go on the world’s longest escalators, was expanded in 1915. The rectangular light green mosque features many elements of Islamic architecture including arched main entrance and Arabic-style arched windows on all sides. 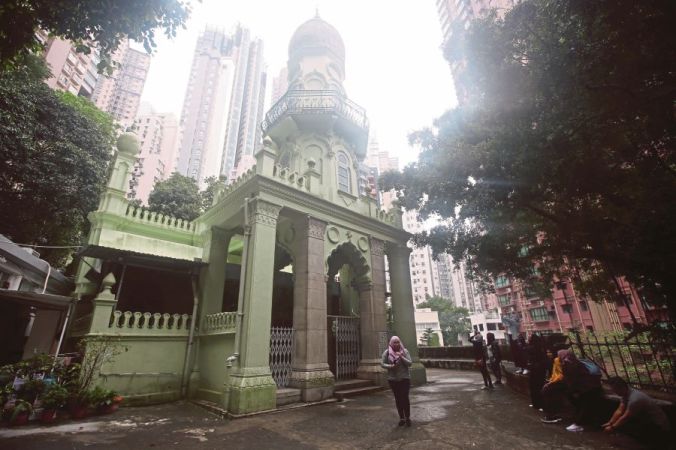 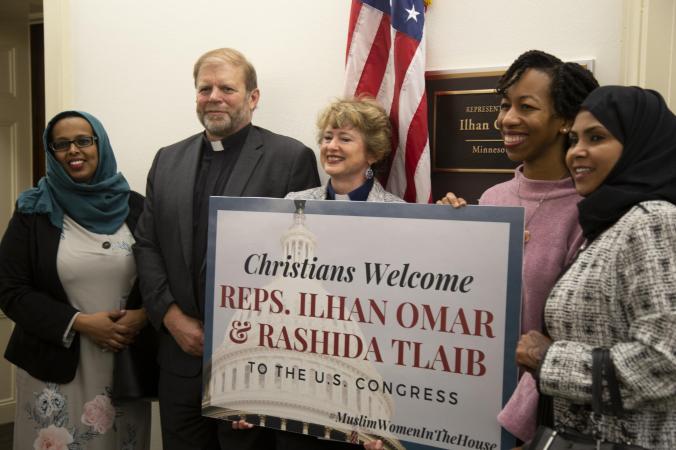 Led by an online Christian organizing group called Faithful America, this message was signed by 7,400 Christians nationwide, and given to the congresswomen’s staffs after their swearing in this afternoon.

Faithful America as well as other organizations and individuals that signed the letter saw it as a necessary action because of the Islamophobic rhetoric exhibited by some far right Christians, including far-right pastors like E.W. Jackson, who was recorded saying that, “the floor of Congress is now going to look like an Islamic republic. We are a Judeo-Christian country. We are a nation rooted and grounded in Christianity and that’s that. … Don’t try to change our country into some sort of Islamic republic or try to base our country on Sharia law,” on his radio program last month.

“The assumption should be that Christian Americans, along with Americans of all faiths and backgrounds, would of course welcome new members of Congress regardless of their religious affiliations,” said Dr. Catherine Orsborn, campaign director at Shoulder to Shoulder, an interfaith organization working to end anti-Muslim sentiment. She helped deliver the welcome message to Omar and Tlaib.

“By being themselves and doing their best in their elected capacities, these incredible women will live out what it means to be American and Muslim without any contradiction,” Orsborn said.

Pope Francis will arrive in the UAE at a time when relations between Muslims and Christians are both complex and contradictory. Yet ambiguity has characterised the relationship between the world’s two biggest faiths ever since the time that the Prophet Mohammed entered into discussions with a group of Christians who visited him in Makkah almost 1500 years ago. Muslim-Christian relations have, over the centuries, oscillated between conflict, coexistence and conversation.

Ours is a time in which tensions between the two faiths – whose members constitute almost half the world’s population – have reached a low point that has seen some reaching for comparisons with the Crusades, the Inquisition, the expansion of the Ottoman Empire or the excesses of European colonialism. And yet – thanks to the goodwill of men such as Pope Francis, ­together with a host of leaders of Muslim and Christian communities at the local level – it is also the time of a new global friendship between members of the two religions.

Christianity and the Prophet Mohammed

Muslims and Christians have never been quite able to make up their minds about one another. In his early years the Prophet Mohammed saw his teaching as very much in continuity with the traditions of Judaism and Christianity. He expected that Jews and Christians, having Abraham and Moses as common ancestors, would accept his prophetic message as a continuation of their own. All were “People of the Book” who had received revelations of God in written texts.

Christian writers disagreed, often vehemently, but the disagreements were largely theological. In practice, relations between Muslims and Christians were good. While pagans in conquered territories were expected to convert to Islam, Christians and Jews were given the status of “dhimmi”, which allowed them to practise their religion in private and govern their own communities. In return they paid a poll tax. Though Byzantine polemicists insisted that Islam was a plot to destroy the Christian faith, other Christians saw Islam as “the rod of God’s anger” to deliver them from the oppressive rule of the Orthodox in Byzantium.

FULL ARTICLE FROM THE NATIONAL