The following is an introductory message from the administrator of a new project encouraging Muslim women to see their unique identity as a source of pride, pushing back against those who misunderstand or denigrate their decision to wear hijab.  Anyone who recognizes the need to show respect for people’s life-style choices as an expression of their religious identity should applaud this effort.  You are encouraged to visit the website linked below the message from Amara to hear what these women wish to share about that identity.

A MESSAGE FROM ADMINISTRATOR AMARA MAJEED

As a Muslim living in America, the gaping gap of ignorance exists between myself and others: my headscarf, otherwise known as the hijab. I pleat, fold, and fasten a piece of cloth over my head everyday before I go out, but the hijab means more to me than merely concealing my hair. In the religion of Islam, both Muslim men and women are expected to preserve their modesty, and from an Islamic point of view, the hijab contributes to the creation of a modest atmosphere. In an era where women are universally sexualized, Muslim women believe that the hijab can prevent this from happening. The Hijab Project is a social experiment that I’d like girls—both Muslim and non-Muslim—to begin. Try on your own headscarf to school, the mall or other public place, and observe the reactions that people give you. Are you looked at differently? Do people treat you differently? Then, share your experience here! If you currently wear a hijab, tell us your hijab story. A bridge of understanding needs to be built between Muslims and non-Muslims, and experiencing the lifestyle of a growing and often misunderstood culture in America is vital to shedding the lack of knowledge that many people have regarding Islam as a religion. I’m looking forward to hearing your hijab stories! السلام عليكم–[May peace be upon you]

As an evangelical theologian and pastor, I want to say that ISIS is evil. Evil is a term we don’t normally hear in the media or politics, which is likely a good thing given our lack of public morality and civility these days. Indeed, judgementalism was condemned by Jesus, but is still often practiced by many churches — so humility is always called for. But it is still a responsibility of the faith community to name evil where it clearly exists in the world. And by any standards, the actions of ISIS are evil.

The latest report issued by the Office of the UN High Commissioner for Human Rights and the UN Assistance Mission for Iraq, on “The Protection of Civilians in Armed Conflict in Iraq,” catalogues the human rights atrocities committed by ISIS, making it abundantly clear that this group is evil. They include:

The report goes on to identify the targeting of ethnic and religious groups — such as Christians, Yazidis, Shi’ite Muslims, and many others — and subjecting them to “gross human rights abuses, in what appears as a deliberate policy aimed at destroying, suppressing or expelling these communities permanently from areas under their control.” The report describes the actions as possible “war crimes, crimes against humanity, and possibly genocide.”

The U.S. Supreme Court indicated Wednesday that it will side with a Muslim woman denied a job at an Abercrombie & Fitch Co. clothing store in Oklahoma because she wore a hijab, or headscarf, for religious reasons.

Nine justices heard a one-hour argument as part of an appeal brought by the U.S. Equal Employment Opportunity Commission (EEOC), the federal agency that sued the company on behalf of Samantha Elauf.

Elauf was 17 when she was interviewed for a “model” position, as the company calls its sales staff. She impressed the assistant store manager, but her application was rejected over her headscarf that apparently contradicted the company’s “Look Policy,” centered on an East Coast preppy style.

The dress code prohibited caps or hats, and Abercrombie & Fitch had argued that was the reason Elauf was not hired — not religious discrimination. Abercrombie has since changed its policy on headscarves. But it maintains a ban on black clothing.

The justices on Wednesday aggressively questioned Abercrombie’s lawyer on the premise that an employer must take steps to accommodate the religious beliefs of a job applicant or worker.

“What the Supreme Court is now confronting is how courts should sort out the duty to show that respect: must the job applicant specifically make her private religious needs known up front, or must the company make its policies clear, so that an applicant knows what is required and can ask for an accommodation,” said a post on the SCOTUS blog.

Elauf did not explain that she was wearing the hijab for religious reasons during the interview for a sales job at the store in 2008 in the Woodland Hills Mall in Tulsa, Oklahoma.

Every few days, we seem to wake up to another massacre committed by ISIS. And these are, of course, only the ones that the media reports. ISIS, in reality, is committing massacres on a daily basis. We have become familiar with their crimes in Syria and Iraq since last summer. But now their latest playfield, we are learning, is Libya. And their latest scapegoats are the Copts of Egypt.

In a recent, 21-page long analysis in The Atlantic, entitled ‘What ISIS Really Wants,’Graeme Wood argues that the ISIS interpretation and application of Islam is one of many ‘legitimate’ manifestations of Islam. He nowhere argues that this is the only, or even the main, interpretation of the religion. Therefore, though it is important also to read and be aware of Wood’s critiques, it seems to me that many have been too quick in accusing him of contributing to the stereotyping of Islam. For instance, the article of Jack Jenkins, on the website thinkprogress.org, ‘What the Atlantic Gets Dangerously Wrong about ISIS and Islam,’ dismisses him far too quickly. In my opinion, his dismissal is based on arguments that he reads into Wood’s analysis, rather than on actual affirmations Wood makes. We all need to form our opinions based on our own analysis of the arguments offered, but here are 5 takeaways that I propose, taken from the most recent events and their analyses:

1) It would be far better for everyone if Muslim apologists stopped dissociating ISIS from some supposed ‘true Islam.’ As critics of Wood have argued, Islam is far from uniform. But this fact argues as much against the stereotyping of Islam as entirely violent as it does against claiming that ISIS has nothing to do with Islam. What the claim about Islam’s vast diversity (which I endorse vividly) argues for is that ISIS adherents are ‘legitimate’ Muslims, by the mere fact that they claim so themselves. Muslim apologists should stop feeling like they have to defend Islam by saying ISIS has nothing to do with Islam.

FULL ARTICLE FROM THE INSTITUTE OF MIDDLE EAST STUDIES

In a show of solidarity, Muslims are standing with Christians and giving up guilty pleasures for lent.

For Christians, lent is a period of self-restraint, marked by fasting, repentance, prayer and self-control. Luxury or rich foods, such as meat and dairy are often avoided by those taking part.

Abstention from personal “bad habits” such as watching television or eating too much sugar is also commonly practised.

The observance starts on Ash Wednesday and lasts until Easter, as Christians imitate the 40 days Jesus spent fasting in a desert before being blessed by John the Baptist.

Using #Muslims4Lent, followers of Islam are tweeting photos of themselves in which they declare what they will be giving up. 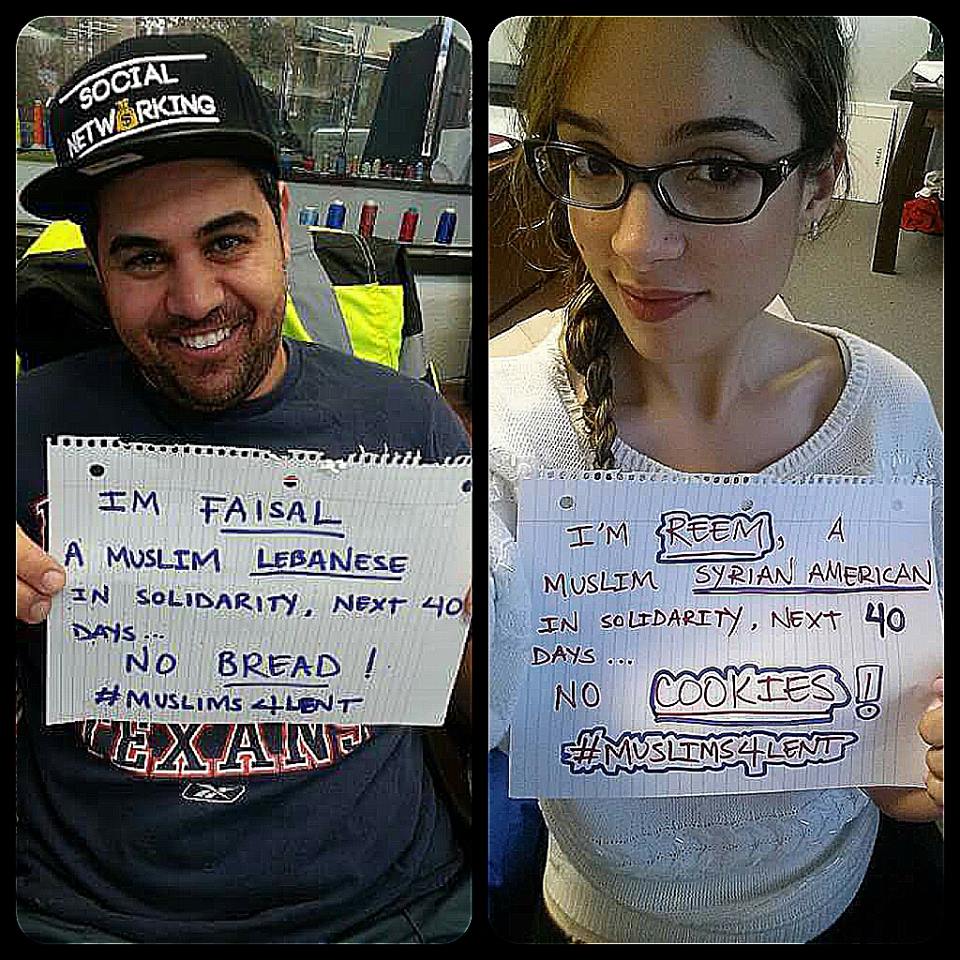 FULL ARTICLE FROM THE INDEPENDENT (UK)

In the wake of a deadly shooting attack at a synagogue in Denmark last week, a group of Norwegian Muslims intends to hold an anti-violence demonstration at an Oslo synagogue this coming weekend by forming a “peace ring” around the building.

One of the event organizers, 17-year-old Hajrad Arshad, explained that the intention was to make a clear statement that Muslims don’t support anti-Semitism.

“We think that after the terrorist attacks in Copenhagen, it is the perfect time for us Muslims to distance ourselves from the harassment of Jews that is happening,” Arshad told the Norwegian Broadcasting Corporation NRK in an interview cited by The Local News website on Tuesday.

She noted that the group aimed to “extinguish the prejudices people have against Jews and against Muslims.”

The demonstration drew praise from the local Jewish community.

FULL ARTICLE FROM THE TIMES OF ISRAEL

After months of delays and weeks of internal and external discord surrounding the White House’s Summit on Countering Violent Extremism, President Barack Obama finally got to tell officials from more than 60 countries that terrorism, not Islam, is the enemy.

“We are not at war with Islam. We are at war with people who have perverted Islam,” Obama said Wednesday, the second day of the summit. He later called on Muslim leaders “to do more to discredit the notion that our nations are determined to suppress Islam.”

Obama’s sentiments were welcomed by the audience, which politely applauded throughout his speech. But they did little to overshadow the controversy surrounding the buildup to the summit or the fact that not much is expected from the three-day event.