Join author Safi Kaskas ( The Qur’an:  A Contemporary Understanding) this coming Saturday (December 3) at 10:00 am Eastern Time (US) for a live webinar on Understanding Islam.

Many people are asking questions about Islam. Is Islam inherently violent? What does the Qur’an actually say? Does ISIS represent true Islam? Should we be fearful of Muslims?

These are a few of the topics I’ll be discussing this Saturday at 10:00 a.m. Eastern with Muslim author and speaker Safi Kaskas. You can join the conversation with comments or questions by clicking our AnyMeeting link here.

Safi is an American Muslim strategic management executive with a wealth of knowledge about Islam. As a co-founder of East-West University in Chicago, he’s a big proponent of education. Safi travels the globe to deliver talks about Islam in the modern world. He has spoken multiple times at the U.S. National Prayer Breakfast and serves on the board of the peacemaking organization Bridges to Common Ground.

Lots of people are worried that Donald Trump was serious when he said he would ban all Muslims from entering the United States. And that’s especially true for some of the Christians who are helping Muslim refugees resettle in America.

When Luke Keller woke up to the news that Trump would be president, he picked up the phone.

“The Unites States, we have our problems, but we take care of ours.”

The 27-year-old Keller has lots of Muslim friends. He runs a nonprofit outside of Atlanta called The Lantern Project that trains refugees in trades. Many of them come from Muslim-majority countries such as Syria, Iraq, Afghanistan and elsewhere.

“[The training program] teaches them certified construction and we do welding, we do pipe fitting, we do masonry, we do carpentry, we do electrical,” Keller says.

In one of the largest organized marches in the history of the world, tens of millions of Shia Muslims made an incredibly heartening statement, by risking their lives to travel through war-stricken areas to openly defy ISIS. This massive event that would have undoubtedly helped to ease tensions in the West was almost entirely ignored by corporate media.

Women, men, elderly, and children made their way to the city of Karbala on Sunday and Monday last week for the holy day of Arbaeen. Arbaeen is the event which marks the end of the 40-day mourning period following Ashura, the religious ritual that commemorates the death of the Prophet Mohammad’s grandson Imam Hussein in 680 AD.

As the Independent reports, massive crowds paid homage to the shrines of Imam Hussein and his half-brother Abbas in Karbala, where they were killed in a revolt against the Umayyad ruler Yazeed in the 7th century AD when they refused to pledge allegiance to Yazeed’s Umayyad caliphate.

This is an alert to Christians to make an extra effort to show our support for our Muslim neighbors pushing our elected officials, including our president elect, to renounce in no uncertain terms the hatred the election has fostered and fed.

Letters threatening that President-elect Donald Trump will do to Muslims what Adolf Hitler “did to the Jews” were sent to three California mosques last week, according to the Council on Islamic-American Relations, or CAIR.

The handwritten letter, which referred to Muslims as “children of Satan,” were mailed to Islamic centers in San Jose in Northern California and Long Beach and Pomona in Southern California. It called Trump the “new sherriff [sic] in town” who will “cleanse America and make it shine again” by eradicating the country’s Muslim population.

“You Muslims are a vile and filthy people. Your mothers are whores and your fathers are dogs,” the letter states. “You are evil. You worship the devil. But, your day of reckoning has arrived.”

The letter went on to say that Muslims “would be wise to pack your bags and get out of Dodge.”

The Evergreen Islamic Center in San Jose was the first to receive the letter, according to CAIR, a civil liberties and advocacy organization for Muslims in the United States. Authorities were alerted Thursday night after the center’s imam found it in the mail, the San Francisco Chronicle reported.

[‘When you hang one black person, you have to hang them all’: Teacher’s lesson draws outrage]

“The hate campaign targeting California houses of worship must be investigated as an act of religious intimidation, and our state’s leaders should speak out against the growing anti-Muslim bigotry that leads to such incidents,” Hussam Ayloush, executive director for CAIR’s office in Los Angeles, said in a statement.

The letter, which was signed “Americans for a Better Way,” ended with “long live President Trump and God bless the USA.”

The religious leaders spoke out against Islamophobia and in support of American Muslims, who have been feeling fearful and uncertain about their future in Trump’s America. They also called on Trump to forcefully denounce anti-Muslim hate crimes, which the FBI reports shot up by 67 percent in 2015.

“We must promise that no one will ever make another American afraid ― not the bigots, not the alt-right, not the chief strategist of the next administration, not the president of the United States,” Rabbi Jack Moline, president of the advocacy group Interfaith Alliance, said at a press conference at the Masjid Muhammad. “No one will make the precious children of this community, of any community, afraid.”

After speaking with media, the interfaith leaders attended a prayer service at the mosque. Also known as the Nation’s Mosque, it’s about two miles away from Trump’s future address at 1600 Pennsylvania Ave.

As a line of schoolchildren obediently marched past the canary yellow lockers Tuesday morning at Woodlawn Community School, two more lines had formed at the end of the hallway — an assembly line of volunteers unloading a semitrailer full of turkeys, and the mothers and grandmothers waiting to take one home to feed their families.

Volunteers also hung a banner advertising the Sabeel Food Pantry, a Muslim-run pantry on the city’s Northwest Side. The mission of Sabeel — an Arabic word meaning “way” — is to give the poor a way to survive, a central obligation of the Muslim faith, volunteers say.

For 16 years, the Chicago Muslim community has distributed free Thanksgiving turkeys to underprivileged families on the South Side. But this holiday season, the group more than tripled the number of free birds from last year to 5,000 and expanded the project to eight elementary schools in three neighborhoods.

Dr. Sofia Shakir, an organizer of the annual turkey drive, said while plans to expand the effort had been underway for almost a year, it was serendipitous that it all came together after what she considered a discouraging presidential campaign — and now amid fears of being viewed as un-American by the administration of President-elect Donald Trump. Last year, just days before Thanksgiving, Trump proposed the government register and track Muslims in the U.S. as part of the nation’s war on terror. Earlier this week, Trump’s incoming chief of staff Reince Priebus said there would not be a registry based on religion but would not “rule out anything.”

FULL ARTICLE FROM THE CHICAGO TRIBUNE

An open discussion to unite people against hatred.  All faiths and races gather for nearly two hours Sunday to talk about how the nation feels after the divisive presidential election.
The meeting had a simple message, inclusion.
Religious leaders from many denominations including Islam, Judaism and Christianity led the open discussion.
The hope was for an open and honest discussion without judgment.
“The message is the same.  It’s from the same god –love for all and hatred for none,” Mansoor Shams of The Ahmadiyya Muslim Community, told ABC2.
That message was the reason behind Sunday’s event “Faiths Unite Against Hatred-Our Reaction To The Presidential Election.”
This inter-faith gathering was organized for all people of all races and religions to have an open conversation about one of the most polarizing elections of our time.
“Since this election has taken place, there’s been a lot of protests on the streets there’s been a lot of divisiveness a lot of worry  a lot of concern so we thought that as faith believing people that it would important to gather everyone together,” Shams said.
FULL ARTICLE FROM ABC 2 NEWS (BALTIMORE)

Just days after the election, a Muslim student at the University of Michigan  was approached by a stranger who ordered her to remove her hijab under threat that he would set her on fire.

According to Nusayba Tabbah, the internal vice president of the school’s Muslim Students’ Association, this was not an isolated event, but rather, an acceleration of an anti-Muslim climate on campus. 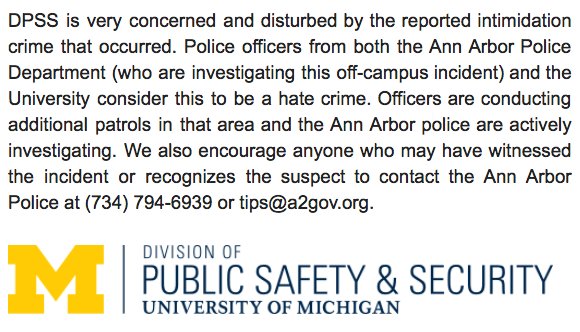 SSA program committee member Rami Ebrahim suggested the group gather to pray one of their five daily prayers, ishaa, in public. In doing so, the community would be making a powerful statement, letting those who seek to antagonize them know that they will not be bullied into hiding who they are and what they believe.

(RNS) While Americans watched Hillary Clinton and Donald Trump fighting to the finish in a noisy and polarized campaign, Germans were quietly debating their own presidential election in far different terms.

Among the names put forward as candidates are two leading Protestant bishops — one of them a woman — and even a respected Muslim writer.

That’s not the only way the presidential election in Berlin next February will be different from the American contest.

German presidents are figureheads without real power, nominated by the parties in Parliament and indirectly elected by its members along with representatives of the state assemblies. They spend a lot of time meeting visiting dignitaries, addressing conferences and cutting ribbons.

But one job qualification that stands out is the idea that a president should be a moral leader willing and able to speak about the state of the nation’s soul. Pundits like to call this the “preacher in chief” aspect of the job.