This is part of Marc H. Ellis’s “Exile and the Prophetic” feature for Mondoweiss. To read the entire series visit the archive page.

It may seem off topic to write about September 11th what with Israel’s withdrawal from the peace talks yesterday. Though the statement Israel released is nuanced. As I read it, Israel wants to say no – and wait – to see how the Palestinian unity pact works out. Or doesn’t. Meanwhile settlement building and other provocative measures will continue. Of course.

But our interconnected world has other Middle Eastern realities closer to home. Yesterday a flap surfaced over a video to accompany the National September 11 Memorial Museum in New York City set to open in May.  I haven’t seen the video – it hasn’t been released yet. Nonetheless, it is causing quite a stir in the interfaith dialogue community whose primary investment it seems is portraying religion as innocent.

The video in question – “The Rise of Al Qaeda” – is less than seven minutes long and is narrated by NBC new anchor, Brian Williams. The video was recently vetted by several self-appointed and evidently government approved interfaith careerists who find the video wanting. The reason: language that seems to equate the World Trade tragedy with Islam. 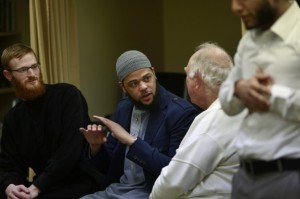 The bearded young Muslims scrolled through their iPhones and shared teachings of their prophet while older Christian men and women flipped through old-fashioned notebooks and talked about Jesus. They gathered each Tuesday for two months, these emissaries of faith exploring their differences and similarities in surprising ways.

And the Muslims had been stung by what they called unfair portrayals of their faith, including a campaign launched last year against their plan for a mosque in Virginia Beach.

But with each passing week, the meetings of East and West evolved from a polite curiosity – “Don’t wear socks with any holes in them,” one woman reminded others before the first visit to Crescent Community Center – into teaching and friendship.

Lon Scofield, 67, who calls himself “just to the right of Rush Limbaugh,” had trouble reconciling terrorism by radical Muslim groups with the kind, thoughtful men he met and grew to respect. The Muslims told the group they must separate the acts of radical men perverting religion from the truth of the Quran and Islam. Scofield agreed in principle but said that didn’t go far enough.

To honor their Christian friends at Easter – a celebration of renewal – Muslim leaders in Sacramento will deliver 300 gifts at noon today to the First Covenant Church in Rancho Cordova.

Gifts for the children of the 2,000-member evangelical church are part of an interfaith exchange that Pastor Mark Shetler and Irfan Haq of the SALAM Islamic Center started in 2012. The gifts represent “a gesture of good will and a show of love and respect for our Christian brothers and sisters,” said Haq, president of the Council of Sacramento Valley Islamic Organizations. “This is possibly the first such gesture taking place in U.S. religious history.”

First Covenant made some history of its own in 2012 and 2013, when about 60 congregants served iftar dinners for hundreds of Muslims during the month of Ramadan, Shetler said. Throughout Ramadan, Muslims fast from dawn to dusk, breaking the fast with an iftar meal after sundown.

FAMAGUSTA, Cyprus –  An unexpected moment during the Good Friday service in a long-abandoned church in Cyprus’ breakaway north illustrated how religion is helping to bring together Christian Greek Cypriots and Muslim Turkish Cypriots on this ethnically divided island.

It came when Turkish Cypriot Umit Inatci handed the key of the church of Agios Georgios Exorinos in the medieval center of Famagusta to the city’s Greek Orthodox Metropolitan Vasilios, saying: “This is not gift, it’s something that is surrendered to its owner.”

Rapturous applause greeted the announcement by Inatci, who helped make possible the first Holy Week service at the 14th-century church in nearly 60 years.

Among the hundreds of faithful there was Mikis Lakatamitis, who was baptized at the church eight decades ago. Tears welled up in his eyes as worshippers lined up nearby to kiss an embroidered cloth depicting Christ’s preparation for burial.

“I want to live in this moment because I don’t know if I’ll relive it again,” said Lakatamitis, whose family abandoned their nearby home at the start of ethnic strife in the late 1950s.

Cyprus was divided along ethnic lines in 1974 into a Greek Cypriot south and Turkish Cypriot north after Turkey invaded following a coup aiming to unite the island with Greece.

For decades, there was no contact between the religious leaders of the two communities. In the north, about 500 churches and monasteries — many hundreds of years old — were left to ruin, looted or converted for other uses. In the south, only eight of about 110 mosques still operate.

But that changed in 2009 with a kind of faith-based diplomacy that has quietly been conducted between the leader of the island’s Greek Orthodox Christian Church Archbishop Chrysostomos II and Turkish Cypriot Muslim Grand Mufti Talip Atalay.

(RNS) Law enforcement officers in Virginia will no longer receive credit for a counter terrorism course taught by a former FBI agent and anti-Muslim activist after the academy where the course was taught canceled its accreditation the day it was scheduled to begin.

Some 50 people, many from out of state, reportedly enrolled in the seminar, “Understanding and Investigating Jihadi Networks in America,” advertised as $225 per trainee.

The Culpeper controversy is the latest law-enforcement training course to draw harsh criticism from Muslim groups who say agencies hire purported experts in Islam or counterterrorism who in fact have other agendas.

While Muslim-American activists and media reports have raised awareness about anti-Muslim trainers, occasionally resulting in curriculum reviews and canceled classes, many say the problem persists because there are too few police administrators to properly vet courses and instructors.

The consequences, critics add, go beyond political incorrectness and include undermining public safety and obscuring real dangers as police officers chase bad leads based on profiling.

FULL ARTICLE FROM THE CHRISTIAN CENTURY

The news that Brandeis University cancelled the honorary degree it was planning to give Ayaan Hirsi Ali has raised a storm of controversy. On one side  wereMuslims applauding the move as an apt recognition that Ali’s narrative was, if not Islamophobic in itself, fodder for the cannons of the rabid Islamophobic right. On the other were those protesting that the withdrawal represented a betrayal of freedom of speech and a cowardly retreat in face of the howling of religious zealots.

Personally, I think Brandeis should never have thought about awarding Ali  with an honorary degree. Not because she is Islamophobic but because her “scholarship” is at best weak, and at worst fraudulent.  Ali left Denmark amid huge controversy because she lied about her name, her birthdate, the circumstances in which she left her home country, and her family history, including the fact that she was fleeing an arranged marriage . That alone calls into question her personal testimony about her life and the nature of the Muslim society she grew up in.

More importantly, reading Ali’s description of life in Muslim countries and of Islamic theology, it becomes immediately clear that she paints circumstances with an overly broad, overly polemical brush. For instance, she says things like, “The veil is to show that women are responsible for the sexual self-control of men.” If you’ve read the Qur’an, you know that the Qur’an doesn’t ever directly tell women to cover their heads, and it certainly doesn’t tell men that they have free reign if a woman isn’t wearing a scarf. It does tell both men and women to be modest, and admonishes them against sexual relations outside of marriage, and to treat one another with respect, asallies in the quest to live a moral life.

FULL ARTICLE FROM “FOR THE LOVE OF GOD”

BANGUI, Central African ­Republic — The door is unhinged and the rooms are bare, signs of that afternoon when Christian vigilantes arrived at Henriette Oumpo’s mud-brick house to kill her husband.

“They broke down the door,” she recalled, her face etched in grief, “and they began searching for him.”

Her husband, who is a Muslim, escaped through a back window. Clutching knives, the fighters looted the couple’s possessions. Then they prepared to kill Oumpo, 60, and burn the house down. But some neighbors intervened and informed the fighters that she was a Christian by birth. So they spared her life — on one condition.

“Renounce Islam,” one of her attackers said as they left. “Or else we will return and kill you for marrying a Muslim.”

An interreligious delegation comprised of top Christian and Muslim leaders from Central African Republic travelled to the United States this March, determined to tell their country’s tale of conflict and compromise.

This week, these three leaders are hosting U.S. religious and political leaders for a mirror visit to CAR. The group includes representatives from the National Association of Evangelicals, the United States Conference of Catholic Bishops and Catholic Relief Services, and the Islamic Society of North America, along with Ambassador to the United Nations Samantha Power, Rep. Karen Bass (D-CA), Ambassador Linda Thomas-Greenfield, Assistant Secretary for African Affairs, U.S. Ambassador to Rwanda Donald Koran and Stephen Rapp, Ambassador-at-large, Global Criminal Justice.

We came to the United States of America almost a year since our country was set on fire, and still the flames of violence and vengeance are threatening to burn down a history of peace and coexistence in the Central African Republic. Today, security remains the rarest of commodities in our country as men, women and children fear the neighbours they grew up with.

Yet, despite the horrific violence, hope endures. Hope that fires can be put out, wounds healed and a country rebuilt. As religious leaders whose congregations represent almost the entire country, we are clear as to both our moral responsibility and the steps needed to take us out of the darkness. Our voice is strong, our message is simple. We support newly elected President Catherine Samba-Panza and her urgent call for a UN peacekeeping operation as soon as possible to take over from the African and French troops currently on the ground. This UN Operation must be robust not only to help restore security, law and order in our country, but it must bring resources to help rebuild our country’s administration. Without strong institutions, we risk the repeat of cycles of violence.

I was asked once whether religion had done more harm than good in history. “More good, but it’s close,” I replied.

However, the same might be said of many human institutions – governments, the police, the military, the press – and much depends on the time and place in question. The Catholic Church of the Inquisition is not the church of Pope Francis. The rigid Islam of contemporary Saudi Arabia is a far cry from the golden age of 10th- and 11th-century Cordoba and Seville, where Jews, Christians and Muslims lived and worked in relative harmony. The angry, radical Islam of much of Europe contrasts sharply with the Islam of the U.S. and Canada, which is largely moderate and prosperous.

One major problem with religion is the absolutism of many conservative believers. Secular or less observant Jews in the U.S. and Israel are considered no better than equally disparaged gentiles by ultra-Orthodox Haredi Jews. Some very conservative segments of Evangelical Protestantism do not consider Roman Catholics to be authentic Christians. Salafi Muslims in Saudi Arabia and elsewhere are dismissive of any deviation from their interpretation of Islam by more moderate Muslims, especially the small Sufi branch of the religion. Many Sunni Muslims in Arab states and their leaders view the Shi’a branch as heretical.