Rabat, Morocco — Pope Francis landed in Morocco Saturday for a trip aimed at highlighting the North African nation’s Christian-Muslim ties, while also showing solidarity with migrants at Europe’s door and tending to a tiny Catholic flock.

Moroccan King Mohammed VI was on hand to greet Francis when he arrived amid pouring rain in the Moroccan capital, Rabat.

“Dear Moroccan friends, I am coming as a pilgrim of peace and fraternity,” Francis wrote Friday on Twitter. “We Christians and Muslims believe in God, the Creator and the Merciful, who created people to live like brothers and sisters, respecting each other in their diversity, and helping one another in their needs.”

The highlight of the trip is likely to be Francis’ visit Saturday to the Mohammed VI Institute, a school of learning for imams that epitomizes Morocco’s efforts to promote a moderate brand of Islam and export it via preachers to Africa, the Middle East and Europe.

Francis will also visit a migrant center run by the Caritas charity organization and will wrap up his trip Sunday with a Mass and a meeting with Moroccan clergy.

Around 7:30 Friday night at Temple Sinai in Squirrel Hill, a visitor standing in the hallway could hear the braided sounds of a Muslim imam chanting Arabic prayer in one room and Jewish clergy leading Shabbat worship songs in the nearby sanctuary to guitar accompaniment.

They had gathered under one roof for the third annual interfaith Shabbat dinner and service, hosted by Temple Sinai with guests from the nearby Islamic Center of Pittsburgh in Oakland.

The event, launched here in 2017 in the wake of a U.S. travel ban targeted at several majority-Muslim countries, had long been scheduled for this Friday night.

But it took on a much more poignant significance coming one week after a gunman killed 50 worshipers at two New Zealand mosques. 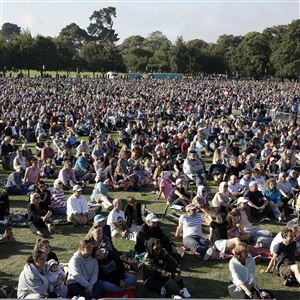 That in turn recalled the terror of the Oct. 27, 2018 killings of 11 worshipers from three Jewish congregations at the Tree of Life / Or L’Simcha synagogue in Squirrel Hill. In the wake of that anti-Semitic massacre, local Muslims and other faith groups rallied to the support of the Jewish community.

On Friday afternoon, in fact, just hours before the sundown start of the Jewish worship services, many Jews and others had attended the main weekly prayer service at the Islamic Center in a similar demonstration of solidarity.

“It’s really beautiful,” said Mohammad Sajjad, executive director of the Islamic Center. “It just reaffirms people in the Pittsburgh community, especially in the interfaith community, they’ve got each other’s backs.”

Early in my tenure at Piedmont College, a student who had taken my Religion 101 class decided to become a Jew. As anyone who has tried it knows, this is not the same as deciding to become a Christian. Judaism actively discourages converts, since a person does not need to be Jewish in order to be righteous in God’s eyes. Why take on so many extra responsibilities if you are fine with God the way you are?

The student, whom I will call Natalie, persisted. When the rabbi called Natalie by her new name, placed a large Torah scroll in her arms, and welcomed her to the Congregation Children of Israel, I sat there feeling very happy for her.

I also felt a little jumpy—not because Natalie had become a Jew, but because it was possible that Religion 101 had played a part in her decision and that was not in the course plan. I was focused on teaching the basics of five major world religions, not helping students decide which one was right for them, yet that was clearly what a number of them were doing. Another student decided to be baptized for the first time after a class discussion on the difference between infant and believer’s baptisms. Another got a tattoo of a yin-yang symbol on her forearm during the unit on Chinese traditions. When she showed it to me after class one day, she asked if I could steer her toward the nearest Taoist church.

These students were the exception, not the rule, but they reminded me that there is more than one way to respond to religious pluralism. The Christian majority may have been raised to ignore the truth claims of other religions, but others are strongly affected by what they learn. Some, like Natalie, make a conscious decision to convert, either to another world faith or to another branch of the one they grew up in.

FULL ARTICLE FROM THE CHRISTIAN CENTURY

BOSTON – An elementary school student who received threatening notes in her classroom. A congressional candidate who dealt with anti-Islam political flyers during her campaign. And a mother who was subjected to an invasive airport search.

Those and many other cases from 2018 are highlighted in a new report released Wednesday by the Massachusetts chapter of the Council on American-Islamic Relations, the state’s largest Islamic advocacy organization.

The goal of the report is to educate the public about the abuses local Muslims are facing while also encouraging people to step forward if they’re dealing with similar issues, said Barbara Dougan, the group’s civil rights director.

“The perpetrators and haters are emboldened,” she said. “The level of aggression toward women is especially troubling. Muslim women who wear hijabs are shouldering the greatest burden of the physical violence and harassment.”

Among the prominent cases highlighted was one involving a fifth-grader at Hemenway Elementary School in Framingham who received two notes in her classroom storage bin — one calling her a terrorist and the other threatening her with death. The incident prompted an outpouring of support from across the country as some 500 people sent letters of encouragement to the young student as part of a campaign promoted by the council.

The first time I remember hearing Islam equated with terrorism from the pulpit, I was a 17-year-old junior at Heritage Christian School in Indianapolis, where my mom was—still is, in fact—an elementary teacher. It was 1998, long before Islamophobia seized the Western mainstream. My family attended a small, nondenominational evangelical church in the suburb of Carmel, where my dad was the music pastor.

“A good Muslim,” our head pastor, Marcus Warner, intoned that Sunday morning, “should want to kill Christians and Jews.” He insisted that this was the only conclusion possible from a serious reading of the Quran. As a doubting young evangelical who would later become an agnostic, this extreme statement made me uncomfortable even then. Today, in the wake of the shootings in Christchurch, New Zealand, it should be considered every bit as offensive as the worst anti-Semitic tropes .

But a harsh double standard has been in effect, as the brouhaha over the comments by Rep. Ilhan Omar (D-Minn.) proved. The United States recognizes anti-Semitism for the poison it is, and polices—at least on the left—even accidental falling into its tropes. But the religiously inspired Islamophobia I grew up with continues to shape Washington’s foreign policy—and Islamophobic statements too often pass without criticism in the public sphere.

To be sure, the statements about Israel by Omar, one of the first two Muslim women ever elected to U.S. Congress, did conjure up anti-Semitic tropes. In a recent op-ed in the Washington Post, she chose her words more carefully, avoiding the rhetoric of “allegiance” that rightly caused many to criticize her language. Some of that criticism, however, was not only made in bad faith—it was shaped by the very Islamophobia that darkly mirrors anti-Semitism.

Muslim militants killed 120 Christians in Nigeria during a three-week period in February and March 2019.

Although not entirely reliable, various local news reports corroborated the incidents and deaths described in reports by Breitbart and the Christian Post website.

Religious affiliation is a secondary issue in the ongoing Nigerian herder-farmer conflict, which impartial experts consistently describe as being primarily a dispute over natural resources and land usage. Reports in the U.S. in March 2019 failed to properly explain the complexity of the conflict, and Breitbart’s article did not mention a major reported atrocity perpetrated against the mostly Muslim Fula people in February 2019.

In the aftermath of the March 2019 Christchurch, New Zealand, massacre in which a white supremacist gunman fatally shot 50 people at two mosques, some right-leaning observers quickly turned their attention to atrocities allegedly perpetrated by Muslims against Christians in recent weeks.

On 16 March, Breitbart reported that “Nigerian Muslim militants” had killed 120 Christians within a space of three weeks since late February 2019. In another article published the next day, the same author wrote that “Political leaders and public figures were falling over themselves this weekend to condemn the mosque attacks in New Zealand, while dozens of Christians were slaughtered by Muslims in Nigeria to the sound of crickets.”

Pope Francis, hand in hand with two children, leaves the Basilica of Our Lady of Loreto where, during a one-day visit, he celebrated Mass and prayed in the shrine containing a small house traditionally venerated as the house of Mary, and believed to have been miraculously transplanted from the Holy Land inside the Basilica, in central Italy, Monday, March 25, 2019. The pope chose Loreto to sign the Post-Synodal Exhortation of last October’s Synod of Bishops. (Credit: AP Photo/Domenico Stinellis.)

ROME – Even though Abdellah Redouane has spent the past 20 years of his life as the director of the Islamic Cultural Center of Italy, the Morocco-born man can’t disguise his hope for the upcoming March 30-31 papal visit to his homeland.

“This is not just a regular visit,” Redouane told Crux on Tuesday. “I believe it’s particularly important because 99 percent of the population in Morocco is Muslim. Inviting the pope, who is the leader of the Catholic religion, is something important, and we must thank those who worked to organize this visit.”

He believes that the papal visit can help build bridges between Muslims and Christians in Morocco, a country where, he acknowledged that despite the legal protection for religious freedom, there are instances of religious-based violence.

Francis’s visit, he said, can help “by reminding us Christians and Muslims are not enemies, but people who can work together, showing the followers of the two religions that if the leaders meet, they embrace, why cannot we too do the same?”