It became clear that I would need to follow the Rev. Jacques Mourad around all day. To the kitchen, where he was preparing kebab with eggplants or demonstrating how to cut onions just so or washing dishes. To the chapel, where he was picking away wax collecting on candle holders. To the classrooms, where he was nodding his head as nuns from India attempted to recite the Mass in Arabic that he has spent months teaching them. To the door, which he was always leaning out of, calling to someone in the street.

There was nothing too small, or nothing small enough, to occupy Father Jacques, for he believed that God was captured best in simplicity. The woman called by name. The prayer in the chapel, where only two of us had gathered beneath the rising Iraqi sunlight. The coffee filled exactly to the correct level.

We are in the upstairs classroom, where he is seated at the head of a table, reciting the Mass in the Chaldean rite from a prayer book, carefully pronouncing the words in Arabic and Aramaic, waiting as the nuns recite them in return. He pauses, flustered. The translation from Arabic to English that they have been consulting is not accurate. The word hanan has been translated as “to pity.” The converts say the experience of war and the onslaught of a group claiming to fight for Islam pushed them toward their new faith. After a number of families converted, the Syrian-Turkish border town’s first evangelical church opened last year.

Islamic State militants were beaten back by U.S. air strikes and Kurdish fighters at Kobani in early 2015, in a reversal of fortune after taking over swaths of Iraq and Syria. After years of fighting, U.S.-backed forces fully ended the group’s control over populated territory last month.

Though Islamic State’s ultra-radical interpretation of Sunni Islam has been repudiated by the Islamic mainstream, the legacy of its violence has affected perceptions of faith.

Many in the mostly Kurdish areas of northern Syria, whose urban centers are often secular, say agnosticism has strengthened and in the case of Kobani, Christianity.

Christianity is one of the region’s minority faiths that was persecuted by Islamic State.

Critics view the new converts with suspicion, accusing them of seeking personal gain such as financial help from Christian organizations working in the region, jobs and enhanced prospects of emigration to European countries.

The newly-converted Christians of Kobani deny those accusations. They say their conversion was a matter of faith. 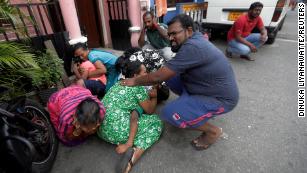 Four years have passed since the Islamic State group’s fighters were run out of Kobani, a strategic city on the Syrian-Turkish border, but the militants’ violent and extreme interpretation of Islam has left some questioning their faith.

A new church is attracting converts. It is the first local Christian place of worship for decades.

“If ISIS represents Islam, I don’t want to be a Muslim anymore,” Farhad Jasim, 23, who attends the Church of the Brethren, told NBC News. “Their God is not my God.”

Religious conversions are rare and taboo in Syria, with those who abandon Islam often ostracized by their families and communities.

“Even under the Syrian regime before the revolution, it was strictly forbidden to change religion from Islam to Christianity or the opposite,” said Omar, 38, who serves as an administrator at the Protestant church. (He asked for his last name not to be revealed for safety reasons. The church’s priest declined to be interviewed.)

“Changing your religion under ISIS wasn’t even imaginable. ISIS would kill you immediately,” he added.

While residents are still dealing with the emotional scars left by the brutality of ISIS, Omar says many people in Kobani have been open-minded about Christianity.

When people ask Todd Green why Muslims don’t condemn terrorism — and they do ask, often — he has a quick response: “Have you ever Googled ‘Muslims condemning terrorism’?”

One of the top search results is MuslimsCondemn.com, an online database created almost two years ago by a 19-year-old college student. “You could spend all day on that site reading Muslims’ condemnations,” Green said.

Fatwas have been declared, campaigns have been launched, memorials and prayer vigils have been held — all in the name of standing up against extremism.

But somehow, Green says, some people seem to have missed out on how vocally most Muslims stand against terrorism, extremism and violence. In his new book “Presumed Guilty: Why We Shouldn’t Ask Muslims to Condemn Terrorism,” the associate professor of religion at Iowa’s Luther College cautions fellow non-Muslim Americans against what he calls not only a “troubling and unethical” double standard, but also “a form of racist scapegoating.”

FULL ARTICLE FROM THE OAKLAND PRESS

Every time a domestic terrorist kills innocent bystanders or heads abroad to join the Islamic State group, experts and pundits try to explain the inexplicable: Why would a person do that?

A new study takes a novel approach to studying radicalization. The findings suggest that it may be the outgrowth of ethnic, racial or religious discrimination.

The study, published in Science Advances, finds an association between anti-Muslim hate and susceptibility to Muslim radicalization in regions of the United States that are poorest and most homogeneous. And it suggests the ethnic diversity of the U.S. may protect against radicalization because people are less prone to pit one group against the other.

The study, done by sociologists at Duke University and a statistician from the University of California, Berkeley, examined internet search data provided by Google in 3,099 counties across the U.S. Specifically, the researchers looked at average monthly search data to see if people in the same geographical areas searched for phrases such as “Muslims are violent” and “How to join ISIS.”

The findings, collected between August 2014 and July 2016, suggest pro-ISIS sympathy is most prevalent in communities with high levels of anti-Muslim sentiment.

“One interpretation of this finding is that violent extremism results from the failure of ethnic integration,” said Chris Bail, a sociologist at Duke and the study’s lead researcher. “People of immigrant background experience a disconnect between their family heritage and their receiving society’s culture and thus become vulnerable to extremist narratives.”

In the aftermath of the Brussels and Pakistan attacks, we once again find ourselves in a heightened climate of panic and anxiety. The widespread fears emanating from these attacks, while understandable, nonetheless can get the best of us, tempting us to buy into deceitful propaganda that views all Muslims as enemies.

The Christian tradition calls its followers not to bear false witness. So how do we live out this calling? What does it mean not to bear false witness against Muslims in the age of ISIS? Here are three false assumptions, if not outright lies, often repeated about Muslims and terrorism, along with some facts that can help us have more honest conversations about our Muslim neighbors and about the violence we encounter in western nations.

1. Muslims do not condemn ISIS or terrorism.

Every time ISIS-inspired attacks strike close to home, a chorus of voices calls upon Muslims either to condemn ISIS or to speak out more forcefully against them than they are.

The problem with these calls is that they ignore the many instances in which Muslims have condemned ISIS and terrorism. The Organization of Islamic Cooperation, Al-Azhar’s Grand Mufti, the Arab League, the Council on American-Islamic Relations, the Islamic Society of North America, and the Muslim Council of Britain have all condemned ISIS in no uncertain terms. More than 100 Muslims scholars signed an open letter to al-Baghdadi, ISIS’s self-proclaimed caliph, to condemn his interpretations of Islam.

The Coptic Orthodox Church announced that the churches bells ring out today at 12:00 o’clock Cairo local time، in solidarity with the brothers in the homeland، Extra News said.

The church offered condolences to the families of the victims.

Al-Rawda mosque in the town of Bir al-Abed in Al Arish was targeted during Friday prayers when a number of militants set off a bomb and opened fire on people attending prayers at a mosque in the country’s north Sinai region on Friday. the attack left 305 killed and 128 injured.

The terror in Egypt on Friday is only the latest grim reminder that Muslims are often the first victims of Muslim fanatics.

The massacre of at least 235 people attending a Sufi mosque in Bir al-Abd on the Sinai coast is being attributed to a local affiliate of the Islamic State, known as Ansar Beit al-Maqdis. This slaughter was particularly venal. Gunmen waited for ambulances and first responders to come to the mosque after an initial detonation and sprayed bullets into the survivors and those dispatched to save them.

An anonymous Muslim cleric told the New York Times that he was shocked the killers would attack a mosque. Prior targets for the terrorists in the Sinai included Coptic Christian churches and a Russian airliner in 2013.