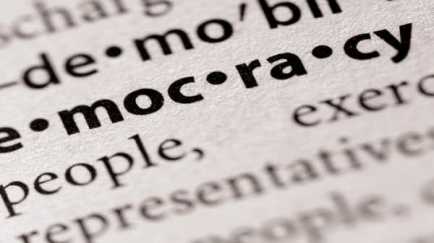 HUNDREDS OF MILLIONS OF MUSLIMS the world over live in democracies of some shape or form, from Indonesia to Malaysia to Pakistan to Lebanon to Tunisia to Turkey. Tens of millions of Muslims live in — and participate in — Western democratic societies. The country that is on course to have the biggest Muslim population in the world in the next couple of decades is India, which also happens to be the world’s biggest democracy. Yet a narrative persists, particularly in the West, that Islam and democracy are incompatible. Islam is often associated with dictatorship, totalitarianism, and a lack of freedom, and many analysts and pundits claim that Muslims are philosophically opposed to the idea of democracy. On this week’s show, Mehdi Hasan is joined by the man expected to become Malaysia’s next prime minister, Anwar Ibrahim, and by Dalia Mogahed, director of research at the Institute for Social Policy and Understanding, to discuss Islam, Muslims, and democracy.

Anwar Ibrahim: We represent Islam the sense that is has to tolerant, liberal, plural, and even accept some of the values of the west.

It’s a never-ending debate. Why do so many Muslims live in undemocratic countries? How do you get more freedom in the Middle East? Does Islam have a problem with democracy? They’re age-old and often quite cliched questions. So, on today’s show, I want to do a bit of debunking and deconstructing, with the help of a very special and a very relevant guest.

AI: You have corrupt, oppressive, tyrannical states and they use the label Islam.

FULL ARTICLE FROM THE INTERCEPT

The antigovernment protests that erupted in Iran in the last days of 2017 showed that millions of Iranians are now disillusioned with the Islamic Republic. Moreover, there are signs that quite a few Iranians are now also disenchanted with Islam itself. Often silently and secretly, they are abandoning their faith. Some opt for other faiths, often Christianity.

This trend is being observed and reported, with understandable excitement, by Christian news sites. “Despite Regular Targeting and Imprisonment, Christianity in Iran Is Spreading,” the Iranian Christian news agency Mohabat News reported recently. The Christian Broadcasting Network, which transmits globally from Virginia, even declared, “Christianity is growing faster in the Islamic Republic of Iran than in any other country in the world.”

While a 2015 study by two researchers, Duane Alexander Miller of St. Mary’s University in San Antonio and Patrick Johnstone of WEC International in Singapore, estimated Iranian converts to Christianity from Islam from 1960 to 2010 at 100,000, it is hard to know the exact number. But the trend seems strong enough to worry Iran’s religious establishment — and make it turn to a solution it knows well: oppression.

Jamal Khashoggi’s murder by Saudi agents in Istanbul doesn’t just cast a harsh light on the authoritarian and reckless behavior of Prince Mohamad bin Salman of Saudi Arabia; it also highlights the rivalry between Turkey and Saudi Arabia, which represent competing forms of Islam.

Saudi Arabia is a monarchy that allows Islam to define all social relations as long as it makes no political claims. Turkey, led by President Recep Tayyip Erdogan and his Justice and Development Party, is a republic whose government was brought to power by the votes of many conservative Muslims.

Despite being an influential Saudi voice, Mr. Khashoggi had over the years embraced these competing visions of governance and the place of Islam in politics. He had been a loyal adviser to Saudi rulers, but he also, like Mr. Erdogan and his party, is widely believed to have subscribed to the Islamist ideal of power democratically achieved — an ideal represented by the Muslim Brotherhood.

Islamism is seen as an existential threat by the region’s monarchies, which apart from Qatar and to a lesser degree Oman and Kuwait were frightened by the Muslim Brotherhood’s coming to power in Egypt after the Arab Spring protests. Saudi Arabia and the United Arab Emirates bankrolled and backed the Egyptian military’s crackdown and coupagainst the Brotherhood government; Turkey and Mr. Erdogan backed the Brotherhood and provided refuge to the group’s leaders and members after the crackdown. 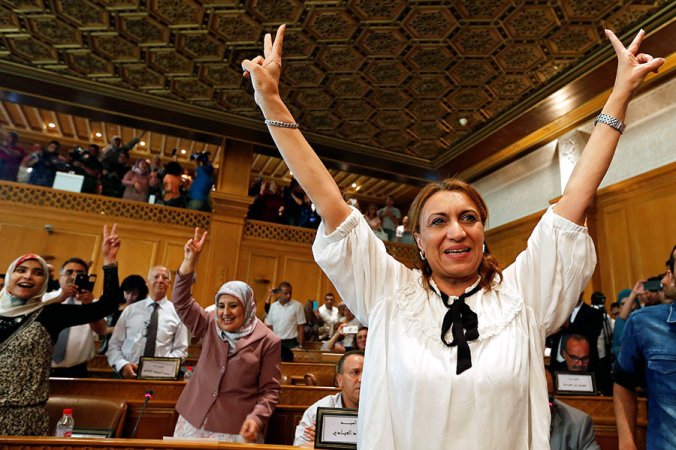 The era of political Islam appears to be waning in some regions. But as some Islamists broaden their appeal, there’s an opportunity to increase our understanding of the nuances of Islam in politics.

Alaa Faroukh insists he is the future. After nearly a decade in the Muslim Brotherhood, he says that he has finally found harmony between his faith and politics, not as a hardcore Islamist, but as a “Muslim democrat.”

“We respect and include minorities, we fight for women’s rights, we respect different points of view, we are democratic both in our homes and in our politics – that is how we honor our faith,” Mr. Faroukh says.

The jovial psychologist with a toothy smile, who can quote Freud as easily as he can recite the Quran, is speaking from his airy Amman clinic, located one floor below the headquarters of the Jordanian Muslim Brotherhood, the very movement he left.

“The time of divisive politics of older Islamists is over, and everyone in my generation agrees,” says the 30-something Faroukh. “The era of political Islam is dead.”

Faroukh is symbolic of a shift sweeping through parts of the Arab world. From Tunisia to Egypt to Jordan, many Islamist activists and some established Islamic organizations are adopting a more progressive and moderate tone in their approach to politics and governing. They are reaching out to minorities and secular Muslims while doing away with decades-old political goals to impose their interpretation of Islam on society.

Is President Trump trying to make enemies of the entire Muslim world? That could well happen if he follows up his primitive ban on refugees and visa holders from seven Muslim nations with an order designating the Muslim Brotherhood — perhaps the most influential Islamist group in the Middle East — as a terrorist organization.

Such an order, now under consideration, would be seen by many Muslims as another attempt to vilify adherents of Islam. It appears to be part of a mission by the president and his closest advisers to heighten fears by promoting a dangerously exaggerated vision of an America under siege by what they call radical Islam.

The struggle against extremism is complex, and solutions must be tailored both to the facts and to an understanding of the likely consequences. Since 1997, the secretary of state has had the power to designate groups as foreign terrorist organizations, thus subjecting them, as well as people and businesses who deal with them, to sanctions, like freezing their assets. President Barack Obama resisted adding the Brotherhood to that list.

There are good reasons that the Brotherhood, with millions of members, doesn’t merit the terrorist designation. Rather than a single organization, it is a collection of groups and movements that can vary widely from country to country. While the Brotherhood calls for a society governed by Islamic law, it renounced violence decades ago, has supported elections and has become a political and social organization. Its branches often have tenuous connections to the original movement founded in Egypt in 1928.

Under State Department guidelines, the “terrorist” designation is intended to punish groups that carry out terrorist attacks. There’s no question that some such groups have grown out of the Muslim Brotherhood, like Hamas, the adversary of Israel, which the United States named a terrorist organization in 1997. Egypt’s president, Abdel Fattah el-Sisi, has worked to crush the Brotherhood in his country since he overthrew his predecessor, Mohamed Morsi, a former Brotherhood leader, in 2013. But there is no evidence that senior Brotherhood leaders ordered any violence or carried out any of the recent major terrorist attacks in Egypt, according to the analysts Michele Dunne and Nathan Brown of the Carnegie Endowment for International Peace.

I spoke with Khaled M. Abou El Fadl, I could hear his dogs barking in the background. Being a dog lover — some Muslims believe dogs are impure — is one of the least of the supposed offenses that has made the UCLA professor the subject of denunciation and threats. He is an American lawyer and an Islamic jurist, a professor of Islamic law at UCLA, and the head of its Islamic studies program. His latest book, “Reasoning with God: Reclaiming Shari’ah in the Modern Age,” explains what sharia, or Islamic law, is and isn’t, and what it means for contemporary Islam. His scholarly critique of Islamist terrorism and Wahhabi extremism make him an important guide in understanding last week’s violent events in France.

How do you think most Muslims react to news like the Paris shootings?

On the one hand, you’re fighting morally with the terrorists themselves, but you are worried about bigotry and prejudice.

The Islam these people envision is disastrous. It’s not … the Islam I was raised with, not the Islam of my mother, my father, my neighbors, my friends.- Khaled M. Abou El Fadl

There are three possible reactions: Some people say, yes, I am a Muslim, but don’t look at me, I didn’t commit the crime. When a Jew or Christian does something in the name of Judaism or Christianity, we don’t hold all Jews or Christians responsible, so don’t expect us to be apologetic about the criminality of criminal Muslims. The second response is denial: It must be some conspiracy because a good Muslim cannot possibly do that. This response is becoming less popular. Third, politically active Muslims try to explain that in Islam there is radicalism that goes back to a deep history of colonialism; they try to engage in this sophisticated worldview hoping to avoid further barbarity. 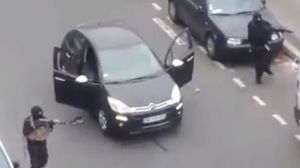 The French satirical newspaper Charlie Hebdo skewers people of all faiths and backgrounds. One cartoon showed rolls of toilet paper marked “Bible,” “Torah” and “Quran,” and the explanation: “In the toilet, all religions.”

Yet when masked gunmen stormed Charlie Hebdo’s offices in Paris on Wednesday with AK-47s, murdering 12 people in the worst terror attack on French soil in decades, many of us assumed immediately that the perpetrators weren’t Christian or Jewish fanatics but more likely Islamic extremists.

Outraged Christians, Jews or atheists might vent frustrations on Facebook or Twitter. Yet, while we don’t know exactly who is responsible, the presumption is that Islamic extremists once again have expressed their displeasure with bullets.

Many ask, Is there something about Islam that leads inexorably to violence, terrorism and subjugation of women?

The question arises because fanatical Muslims so often seem to murder in the name of God, from the 2004 Madrid train bombing that killed 191 people to the murder of hostages at a cafe in Sydney, Australia, last month. I wrote last year of a growing strain of intolerance in the Islamic world after a brave Pakistani lawyer friend of mine, Rashid Rehman, was murdered for defending a university professor falsely accused of insulting the Prophet Muhammad.
FULL ARTICLE BY NICHOLAS KRISTOF FROM THE NEW YORK TIMES