People are social distanced as they gather to pray at Minhaj-ul-Quran Mosque, at the start of Eid al-Adha, in London, Friday, July 31, 2020. Britain???s health secretary is defending the government???s abrupt re-imposition of restrictions on social life across a swath of northern England. Matt Hancock says it’s important to clamp down quickly on new outbreaks of COVID-19. The affected region has a large Muslim population, and the restrictions come prior to the Eid al-Adha holiday starting on Friday. (AP Photo/Kirsty Wigglesworth)

(CNN) One of the most important festivals of the Islamic calendar, Eid al-Adha marks the height of the annual Hajj pilgrimage to Mecca in Saudi Arabia.

It commemorates the story in the Quran of God appearing to Ibrahim — also known as Abraham — in a dream and commanding him to sacrifice his son as an act of obedience.
Muslims believe that as Ibrahim was about to sacrifice his son, God stopped his hand and gave him a sheep or ram in place of his son. A version of the story also appears in the Book of Genesis in the Old Testament and in the Torah.
To commemorate God’s test of Ibrahim, many Muslim families have an animal slaughtered — often through their local butcher — and distribute the meat to family, neighbors and the poor. 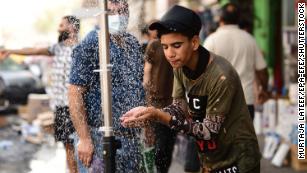 Middle East grapples with heatwave during Eid and Coronavirus pandemic
As the timing of Eid al-Adha depends on the sighting of the new moon, Muslims in different countries sometimes celebrate it on different days, though most follow the lead of Saudi Arabia, as the site of the Hajj.
This year, in Saudi Arabia, the United States and in many other countries, the festival begins on Friday and lasts for four days.
It is a time of celebration when families gather for meals, visit relatives and friends, and children are given money and new clothes. It’s also a time when families visit the graves of their loved ones, pray in a congregation and donate to the poor.
FULL ARTICLE FROM CNN