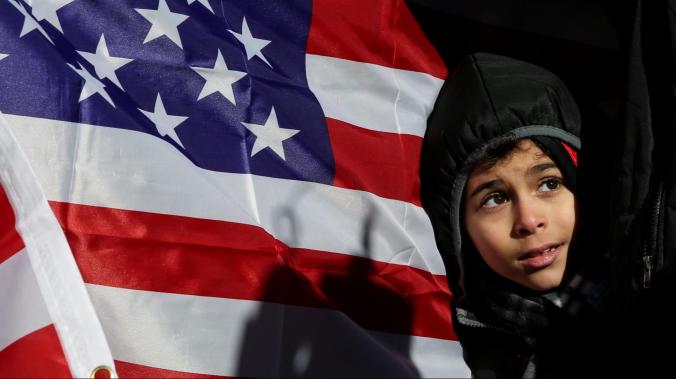 NPR’s Audie Cornish speaks with Asma Uddin about the state of religious liberty in the United States. Uddin is author of When Islam Is Not a Religion: Inside America’s Fight for Religious Freedom.

The Trump administration has made religious liberty a central theme of this presidency. For example, the U.S. Department of Health and Human Services now has a Conscience and Religious Freedom Division. The president has championed judges who have ruled in favor of people seeking religious exemptions to laws. And just last month, the White House strengthened protections for kids who want to pray at school. Asma Uddin is part – Asma Uddin is part of the Inclusive America Project at the Aspen Institute. She is also the author of a book on religious liberty called “When Islam Is Not A Religion.” She told me that President Trump’s focus marks a change from previous administrations.

ASMA UDDIN: There has been just a more pronounced public affirmation of the positive role of religion in American society, the need to protect it. Often, we hear from various government officials – whether it be Mike Pompeo or President Trump or U.S. Attorney General Bill Barr or even Jeff Sessions when he announced a religious liberty task force of the Department of Justice – is this constant refrain about religion is under threat by secularization, threatening forces on the left. So the protection of religion and the protection of our religious freedom – that has become a constant refrain.

CORNISH: What communities have benefited from the administration’s attention to the issue? Are there religious communities that have, essentially, been left out?

UDDIN: Yeah. So, you know, then-candidate Ted Cruz said that it was – he called it the religious liberty election, and he said that it was ultimately about, like, the person who would be able to defend religious liberty the best. And President Trump and Ben Carson and Rick Santorum all got on that bandwagon and said absolutely, this is about religious liberty, and we’re going to protect religious liberty if we’re elected president. But at the same time as they were making these statements, they were also competing with each other to determine who could be the most discriminatory against Muslims, whether it be President Trump’s suggestions about creating a Muslim registry or about banning Muslims from the U.S. – which, as we know, he has moved forward with that as well – or it be Ted Cruz’s suggestion that we surveil Muslim neighborhoods in the aftermath – he brought that up in the aftermath of a terrorist incident – or Rick Santorum saying that Islam absolutely was different from Christianity. He said that it’s not as protected under the First Amendment as Christianity is. And so there was, like, this obvious hypocrisy.