(RNS) — Ayaz Virji had a well-paying position at a Pennsylvania hospital when he decided to uproot his family in 2013 and move to Dawson, Minn., a town with about 1,500 residents and the distinction of being “Gnometown, USA.”

Virji’s Muslim faith and values inspired him to look for a job that was more than just lucrative. In Dawson, he said, he felt he could provide what he called “dignified medicine,” spending time getting to know his patients in an underserved rural community. 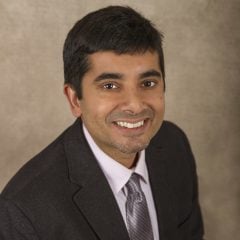 Most Dawson residents had voted for President Trump. And many of Virji’s patients — stirred by Trump’s insistence that “Islam hates us,” his suggestion of a Muslim registry and his promise of a Muslim ban — began to question his family’s presence. As far as anybody knew, they were the first Muslim family to live in Dawson.

That’s when Virji discovered another vocation: speaking to Christian audiences about his faith in order to dispel myths about Islam.