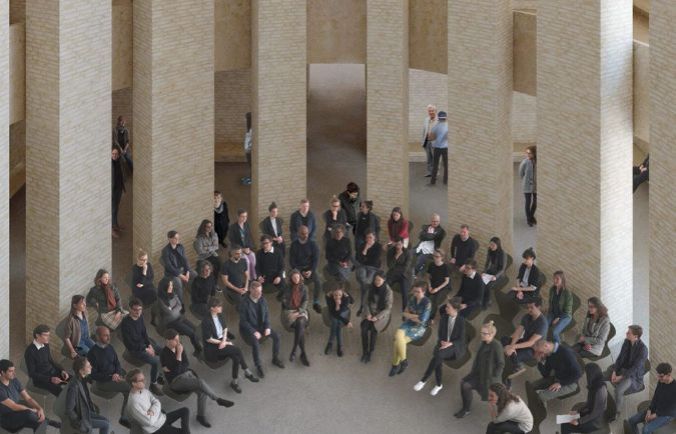 A decade ago, the idea of building a unique religious structure that would combine prayer halls for the three main monotheistic religions was first proposed during archaeological excavations of a plot on the southern end of the Fischerinsel (Fisher Island) in the Mitte neighborhood of Berlin. In 2012, an international architectural competition was held to plan the building, combining a synagogue, church and mosque. The Berlin architectural firm of Kuehn Malvezzi was selected.

The building, named the “House of One,” will not be large, only 670 square meters, and construction is scheduled to start in 2017. This will be the first structure of its kind combining separate prayer halls for the three religions.

Even though the number of Jews in Berlin is tiny compared to the number of Muslims and Christians, each religion is being allocated a prayer hall of similar size – but different in design. The synagogue is in a hexagonal shape, for example.

The building’s central communal hall will be jointly shared, 32 meters high and designed to hold all the worshippers together. The building will be covered in brick and the exterior will feature no religious elements.

Inter-faith prayer halls already exist, in airports for example, but the House of One is unique in that it includes separate spaces for each religion, connected by a common space.

FULL ARTICLE FROM FORWARD (VIA HAARETZ)