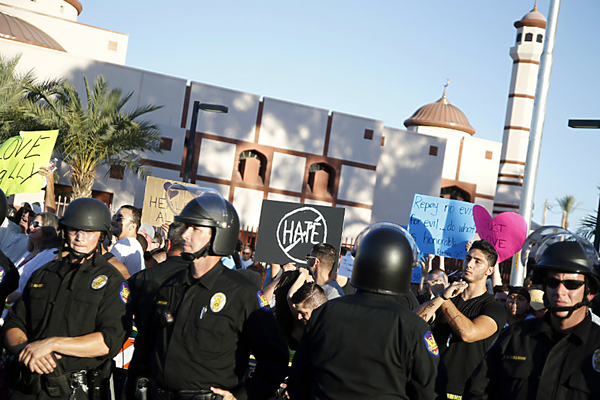 Muslim leaders of mosques in more than 30 cities nationwide are preparing for anti-Muslim marches planned for today.

A Facebook group called Global Rally for Humanity has put out a call for anti-Muslim demonstrations “in every country at every Mosque.” One spin-off group, organizing a rally in Dearborn, Mich., encouraged demonstrators to show up armed, noting that Michigan is “an open carry state.”

Earlier this week, the Council for Islamic-American Relations (CAIR), a Muslim civil rights group, released a statement urging Muslim leaders around the country to take extra precautions ahead of the planned demonstrations.

“Many of these planned rallies may not take place, or they may consist of only a handful of people shouting slurs at worshipers,” the statement read. “But given the recent endorsement of Islamophobia by national public figures, it would only be prudent for mosque and community leaders to prepare for any eventuality.”

“We don’t know if it’s just bluster or something serious,” he said. “Our position is generally not to give attention to people seeking cheap publicity. But there’s been enough violent rhetoric around this event that we just felt it prudent to alert the community about what actions they can take to make sure everyone is safe and secure.”