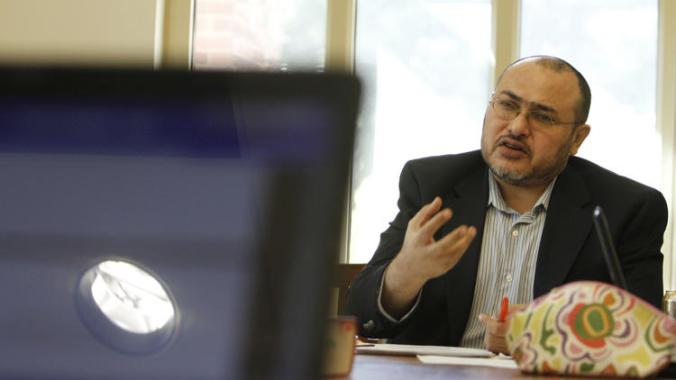 I spoke with Khaled M. Abou El Fadl, I could hear his dogs barking in the background. Being a dog lover — some Muslims believe dogs are impure — is one of the least of the supposed offenses that has made the UCLA professor the subject of denunciation and threats. He is an American lawyer and an Islamic jurist, a professor of Islamic law at UCLA, and the head of its Islamic studies program. His latest book, “Reasoning with God: Reclaiming Shari’ah in the Modern Age,” explains what sharia, or Islamic law, is and isn’t, and what it means for contemporary Islam. His scholarly critique of Islamist terrorism and Wahhabi extremism make him an important guide in understanding last week’s violent events in France.

How do you think most Muslims react to news like the Paris shootings?

On the one hand, you’re fighting morally with the terrorists themselves, but you are worried about bigotry and prejudice.

The Islam these people envision is disastrous. It’s not … the Islam I was raised with, not the Islam of my mother, my father, my neighbors, my friends.- Khaled M. Abou El Fadl

There are three possible reactions: Some people say, yes, I am a Muslim, but don’t look at me, I didn’t commit the crime. When a Jew or Christian does something in the name of Judaism or Christianity, we don’t hold all Jews or Christians responsible, so don’t expect us to be apologetic about the criminality of criminal Muslims. The second response is denial: It must be some conspiracy because a good Muslim cannot possibly do that. This response is becoming less popular. Third, politically active Muslims try to explain that in Islam there is radicalism that goes back to a deep history of colonialism; they try to engage in this sophisticated worldview hoping to avoid further barbarity.