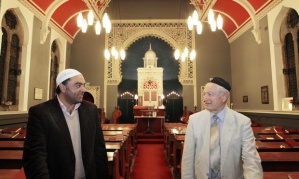 It was around this time last year that the trustees of Bradford’s final remaining synagogue faced a tough choice. The roof of the Grade II-listed Moorish building was leaking; there was serious damage to the eastern wall, where the ark held the Torah scrolls; and there was no way the modest subscriptions paid annually by the temple’s 45 members could cover the cost.

It was a terrible proposition, coming just after the city’s only Orthodox synagogue had shut its doors in November 2012, unable to regularly gather 10 men for the Minyan, the quorum of 10 Jewish male adults required for certain religious obligations.

But rather than close, Bradford Reform Synagogue’s future is brighter than ever after the intervention of Bradford’s Muslim community, which according to the 2011 census outnumbers the city’s Jews by 129,041 to 299.

A fundraising effort – led by the secretary of a nearby mosque, together with the owner of a popular curry house and a local textile magnate – has secured the long-term future of the synagogue and forged a friendship between Bradfordian followers of Islam and Judaism. All things being well, by Christmas the first tranche of £103,000 of lottery money will have reached the synagogue’s bank account after some of Bradford’s most influential Muslims helped Leavor and other Jews to mount a bid.