Behind the anger over a film mocking the Prophet Muhammad, public protest is giving way to measured debate over free speech in the new Muslim world.

But while many crave more openness, few if any will go so far as to say that includes the right to blaspheme.

Angry shouts of “No, no to America!” and “No to Israel!” have been balanced by voices condemning the weeklong violence that has targeted U.S. and other Western embassies and left more than 30 dead in seven countries, including Ambassador Chris Stevens and three other Americans at the U.S. Consulate in Benghazi, Libya.

“Muslims should know that Islamic extremist groups bear some responsibility for the uproar taking place now, and for the collision of the world cultures,” said Sheik Hameed Marouf, a Sunni cleric in Baghdad.

“The moderate people and clerics in the Islamic world should do their best to isolate and stop such groups that do not represent the true moderate values of our religion.”

Religious extremists — whether Muslim, Jewish or Christian — “will lead only to more killings and more blasphemous acts,” he said.

Just like not all Americans are like the people who made the weird anti-Islam movie that is sparking protests in Muslim nations, not all people in Libya are like the ones who killed U.S. ambassador Chris Stevens. Some of the people of Benghazi, where Stevens was killed, held a demonstration against terrorism and to show sympathy for the U.S. Libya Alhurra TV, an Internet TV channel founded at the start of the Arab Spring in 2011, posted Facebook photos of a rally there showing support for America and sympathy for Stevens. Here are some of those pictures:

The FBI is teaching its counterterrorism agents that “main stream” [sic] American Muslims are likely to be terrorist sympathizers; that the Prophet Mohammed was a “cult leader”; and that the Islamic practice of giving charity is no more than a “funding mechanism for combat.”

At the Bureau’s training ground in Quantico, Virginia, agents are shown a chart contending that the more “devout” a Muslim, the more likely he is to be “violent.” Those destructive tendencies cannot be reversed, an FBI instructional presentation adds: “Any war against non-believers is justified” under Muslim law; a “moderating process cannot happen if the Koran continues to be regarded as the unalterable word of Allah.”

These are excerpts from dozens of pages of recent FBI training material on Islam that Danger Room has acquired. In them, the Constitutionally protected religious faith of millions of Americans is portrayed as an indicator of terrorist activity.

“There may not be a ‘radical’ threat as much as it is simply a normal assertion of the orthodox ideology,” one FBI presentation notes. “The strategic themes animating these Islamic values are not fringe; they are main stream.”

At a time when U.S. embassies are being attacked and when people are getting killed over an offensive, adolescent and puerile film targeting Islam – beyond pathetic in its tawdriness – we must begin to own up to the reality of evangelical Islamaphobia.

Many of my own relatives receive and forward pious-sounding and alarm-bell-ringing e-mails that trumpet (IN LOTS OF CAPITAL LETTERS WITH EXCLAMATION POINTS!) the evils of Islam, that call their fellow evangelicals and charismatics to prayer and “spiritual warfare” against those alleged evils, and that often – truth be told – contain lots of downright lies.

For example, one recent e-mail claimed “Egyptian Christians in Grave Danger as Muslim Brotherhood Crucifies Opponents.”  Of course, that claim has beenthoroughly debunked, but the sender’s website still (as of Friday) claims that the Muslim Brotherhood has “crucified those opposing” Egyptian President Mohamed Morsy “naked on trees in front of the presidential palace while abusing others.”

An Israeli filmmaker based in California has gone into hiding after his movie attacking Islam’s prophet Mohammed sparked angry assaults by ultra-conservative Muslims on US missions in Egypt and Libya, and one American was killed.

Speaking by phone from an undisclosed location on Tuesday, writer and director Sam Bacile remained defiant, saying Islam is a cancer and that the 56-year-old intended his film to be a provocative political statement condemning the religion.

Protesters angered over Bacile’s film opened fire on and burned down the US consulate in the eastern Libyan city of Benghazi, killing an American diplomat on Tuesday.

In Egypt, protesters scaled the walls of the US embassy in Cairo and replaced an American flag with an Islamic banner.

“This is a political movie,” said Bacile. “The US lost a lot of money and a lot of people in wars in Iraq and Afghanistan, but we’re fighting with ideas.”

Bacile, a California real estate developer who identifies himself as an Israeli Jew, said he believes the movie will help his native land by exposing Islam’s flaws to the world. 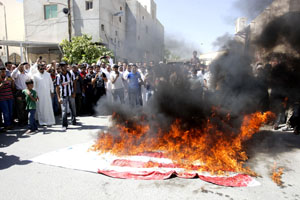 THOUSANDS of people demonstrated across Bahrain yesterday against the controversial American movie defaming Prophet Mohammed. Many non-Muslims took part in the rallies, held after Friday prayers, to condemn the movie, which they described as insulting and hateful.

The demonstrations, mainly in Duraz, Muharraq, Tubli, Riffa, Isa Town and parts of Manama, were led by top Sunni and Shi’ite clergymen.

People chanted slogans against the US and Israel for what they described was a deliberate attack on Prophet Mohammed.

They also demanded action from the international community against those behind the “atrocious” movie, written and directed by an Israeli-American.

The rallies were largely peaceful, although the flags of both countries were burnt.

However, one of the rallies opposite the US Embassy in Zinj, attended by masked people waving Al Qaeda flags, was cut short when it threatened to get out of control.

Police later beefed up security around the embassy and surrounding area amid fears of evening protests.

People took to the streets after imams in mosques across Bahrain dedicated the bulk of their sermons to the subject.

“Prophet Mohammed is not just Islam’s biggest symbol, but his teachings and principles are adored and respected by people of all faiths,” he told the GDN as he demonstrated in Duraz.

“If this movie depicted Jesus, Moses, David or any other messenger of God we would have taken a similar stand.”

Mr Al Mishal called for the creators of the movie to be hauled before the international courts. “Freedom of speech stops when it breaches the rights of others and here it breached the rights of many as it broke the basic principle of religious tolerance,” he said. 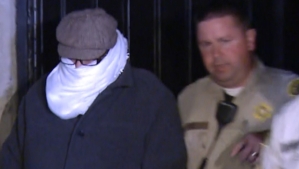 (CBS News) LOS ANGELES – The filmmaker who may be behind the anti-Islamic movie that sparked widespread protests in the Muslim world against the U.S., some of which turned violent, was escorted from his Cerritos, Calif., home shortly after midnight local time Saturday by Los Angeles County Sheriff’s deputies.

CBS station KCBS video showed Nakoula Basseley Nakoula, 55, with a hat on and towel around his face, and wearing winter jacket in the L.A. summer heat, being escorted from the suburban L.A. house.

Nakoula, a self-described Coptic Christian, is thought to be the filmmaker behind “Innocence of Muslims.”

The Sheriff’s Department told KCBS it is assisting federal authorities with an investigation they’re conducting, for questioning on a possible violation of his parole..

Nakoula was convicted in 2010 of bank fraud, and was not allowed to use the Internet.