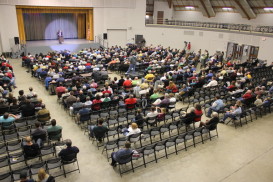 With the big-name draw of Walid Shoebat, more than 200 people gathered at the Waukesha Expo Center Saturday night to hear the message that Islam is a growing threat to law and peace in the United States.

The rally was an especially strong draw for Brookfield residents who oppose a mosque proposed for the city by the Islamic Society of Milwaukee.

Shoebat, who says he is an ex-terrorist, has been confronted about his past by media outlets like CNN, who reported they could find no evidence to support his background story. But he stood by his case Saturday, saying the media were the real frauds.

“Heck, sometimes even FOX News doesn’t even like what I have to say, because I say Islam is not a peace-loving religion,” Shoebat told the crowd.

Brookfield residents Chuck and Sharon Bloom left the rally Saturday with a plastic bag full of books sold by VCY America, a Christian radio station that sponsored the event. The couple was hoping to learn more about Islam and to build a case against the proposed mosque.