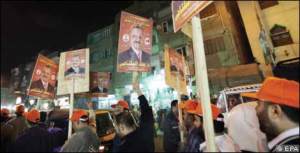 Islamists are likely to represent the “next wave” of political power in the Arab world, Qatar’s prime minister said, as early indications from Egypt’s elections suggested the Muslim Brotherhood’s political arm was heading for victory.

But Hamad bin Jassim bin Jabr al-Thani, the influential prime minister who has led Qatar’s backing for revolutions across the Arab world, told the Financial Times the west should embrace the rise of Islamist movements.

“We shouldn’t fear them, let’s co-operate with them,” he said, insisting that moderate Islamists can assist in the fight against extremist ideology. “We should not have a problem with anyone who operates within the norms of international law, comes to power and fights terrorism,” he said.

Mr Hamad, who played a high-profile role in the Libya military intervention, spoke after the first of three phases in the Egypt’s election. Indications from the count in the nine Egyptian provinces where voting took place this week put Freedom and Justice, the new party set up by the Muslim Brotherhood after the January revolution, in the lead.