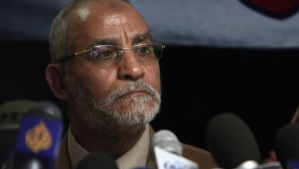 CAIRO – The leader of Egypt’s Muslim Brotherhood said Tuesday he is prepared to compromise with the ruling military on the formation of a new government, and that fears of the “Islamization” of the country are overblown.

Mohammed Badie, the Brotherhood’s general guide, spoke as Egyptians were voting in runoffs for the first round of parliamentary elections, which have been dominated by the fundamentalist group and the hard-line Al-Nour bloc.

“We must live in harmony not only with the military council, but with all of Egypt’s factions, or else the conclusion is zero,” Badie told the private Al-Mehwar TV station. “There will be reconciliation between the three powers: the parliament, the government and the military ruling council.”

His comments appeared to be an attempt to reassure Egyptians and foreign allies that the Brotherhood remains committed to democracy and does not want to take the country down an extremist path.